END_OF_DOCUMENT_TOKEN_TO_BE_REPLACED

Nothing But an Unfinished Song: The Life and Times of Bobby Sands (Paperback) 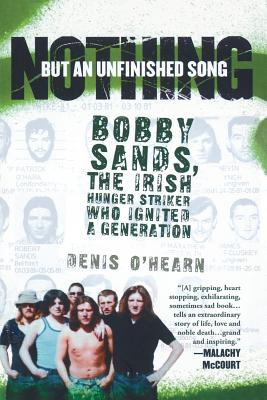 Bobby Sands was twenty seven years old when he died. He spent almost nine years of his life in prison because of his activities as a member of the Irish Republican Army (IRA). When he died on 5 May 1981, on the sixty-sixth day of his hunger strike against repressive prison conditions in Northern Ireland's H Block prisons, parliaments across the world stopped for a minute silence in his honor. Nelson Mandela followed Sands' example and led a similar hunger strike in South Africa, and Fidel Castro compared his suffering to that of Jesus. Bobby Sand's remarkable life and death have made him an "Irish Che Guevara." He is an enduring figure of resistance whose life has been an inspiration to millions around the world. In Hollywood, actors like Sean Penn, Mickey Rourke and Brad Pitt have flirted with a biopic of his life. But until the publication of Nothing But an Unfinished Song, no book has adequately explored the motivation of the hunger strikers, nor recreated this period of history from within the prison cell. Denis O'Hearn's powerful biography, with new material based on primary research and interviews, illuminates for the first time this enigmatic, controversial and heroic figure.

Denis O'Hearn has written for the Guardian, In These Times and many other publications. He is a professor sociology at the Universtiy of Binghamton in New York. He lives in Belfast with his partner and two daughters.