With God on Their Side: How Christian Fundamentalists Trampled Science, Policy, and Democracy in George W. Bush's White House (Hardcover) 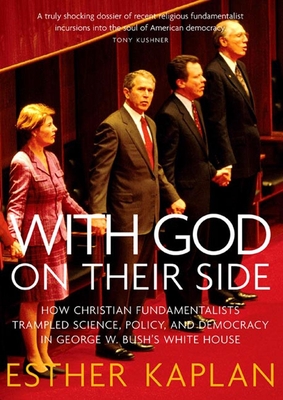 With God on Their Side: How Christian Fundamentalists Trampled Science, Policy, and Democracy in George W. Bush's White House (Hardcover)

When asked which single issue most affected their vote in the last presidential election, more than one in five Americans said moral values--and 78 percent of these voters chose to reelect President George W. Bush. Indeed, Christian fundamentalists made up close to 40 percent of the president's electorate in 2004, and their turnout increased by some four million voters over 2000.

As Esther Kaplan shows in her richly detailed investigation, it's no wonder the Christian right voted for Bush in droves--their loyal support in 2000 produced fantastic results. While organizations that offer abortion counseling and services or help to prevent HIV see their funds cut, church groups receive millions in federal dollars to promote sexual abstinence and marriage (provided, of course, it is heterosexual). Bush has appointed a Christian right dream team to the federal courts, dedicated to tearing down what one such judge calls the so-called separation of church and state. Religious zeal even shapes Bush's foreign policy, as Christian belief in the end times spurs the administration's support for hard-line policies in Israel.

A prescient study of the Christian right's growing political clout, With God on Their Side is essential reading for anyone concerned about America's direction.

Esther Kaplan is a radio and print journalist and a community activist. She was acting senior editor at The Nation and features editor at POZ, the national AIDS magazine; she has also written for the Village Voice, Out, and The Nation. She lives in Brooklyn, New York.