END_OF_DOCUMENT_TOKEN_TO_BE_REPLACED

Injustices: The Supreme Court's History of Comforting the Comfortable and Afflicting the Afflicted (Paperback) 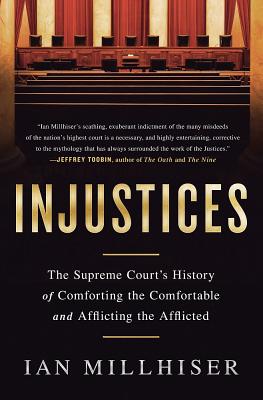 Now with a new epilogue-- an unprecedented and unwavering history of the Supreme Court showing how its decisions have consistently favored the moneyed and powerful.

Few American institutions have inflicted greater suffering on ordinary people than the Supreme Court of the United States. Since its inception, the justices of the Supreme Court have shaped a nation where children toiled in coal mines, where Americans could be forced into camps because of their race, and where a woman could be sterilized against her will by state law. The Court was the midwife of Jim Crow, the right hand of union busters, and the dead hand of the Confederacy. Nor is the modern Court a vast improvement, with its incursions on voting rights and its willingness to place elections for sale.

In this powerful indictment of a venerated institution, Ian Millhiser tells the history of the Supreme Court through the eyes of the everyday people who have suffered the most from it. America ratified three constitutional amendments to provide equal rights to freed slaves, but the justices spent thirty years largely dismantling these amendments. Then they spent the next forty years rewriting them into a shield for the wealthy and the powerful. In the Warren era and the few years following it, progressive justices restored the Constitution's promises of equality, free speech, and fair justice for the accused. But, Millhiser contends, that was an historic accident. Indeed, if it weren't for several unpredictable events, Brown v. Board of Education could have gone the other way.

In Injustices, Millhiser argues that the Supreme Court has seized power for itself that rightfully belongs to the people's elected representatives, and has bent the arc of American history away from justice.

Ian Millhiser is a senior fellow at the Center for American Progress and the editor of ThinkProgress Justice. He received his JD from Duke University and clerked for Judge Eric L. Clay of the United States Court of Appeals for the Sixth Circuit. His writings have appeared in a diversity of publications, including the New York Times, the Guardian, the Nation, the American Prospect, and the Yale Law & Policy Review. He lives in Arlington, Virginia.

"As Ian Millhiser illustrates in his trenchant, persuasive, and profoundly dispiriting book Injustices, the Supreme Court has consistently and unapologetically used its authority to thwart progress and perpetuate inequality."—Slate

"Injustices is a powerful indictment of the strongest institution of the United States.... A must-read for all Americans."—Washington Review of Books