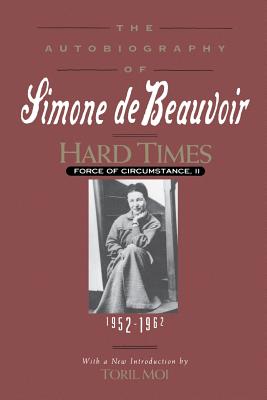 By Simone de Beauvoir, Richard Howard, Toril Moi
List Price: $19.99
Our Price: $16.95
(Save: $3.04 15%)
On Our Shelves Now
This volume of Simone de Beauvoir's legendary autobiography presents Beauvoir at the height of her international fame and portrays her inner struggle with aging. Beauvoir recounts her difficult long-distance romance with novelist Nelson Algren and her involvement with Claude Lanzmann (the future director of Shoah). She also vividly describes her travels with Sartre to Brazil and Cuba, reveals her private sense of despair in reaction to French atrocities in Algeria, and confronts her own deepening depression. Simone de Beauvoir's outstanding achievement is to have left us an admirable record of her unceasing battle to become an independent woman and writer.
Introduction by Toril Moi

Simone de Beauvoir (1908-1986) was a French writer, intellectual, existentialist philosopher, political activist, feminist, and social theorist. Though she did not consider herself a philosopher, she had a significant influence on both feminist existentialism and feminist theory.