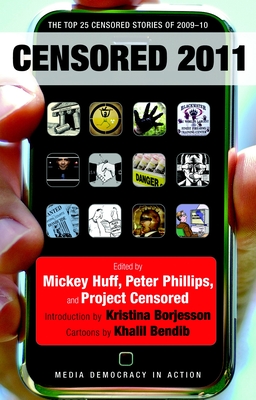 
On Our Shelves Now
The yearly volumes of Censored, in continuous publication since 1976 and since 1995 available through Seven Stories Press, is dedicated to the stories that ought to be top features on the nightly news, but that are missing because of media bias and self-censorship. The top stories are listed democratically in order of importance according to students, faculty, and a national panel of judges. Each of the top stories is presented at length, alongside updates from the investigative reporters who broke the stories.

PROJECT CENSORED, founded in 1976 by Carl Jensen at Sonoma State University, has as its principal objective the advocacy for and protection of First Amendment rights, including freedom of information. In 2008, Project Censored received the PEN/Oakland Literary Censorship Award. Most recently, Project Censored received the 2014 Pillar Award in Journalism and New Media, given annually to persons of conscience, conviction, and achievement who stand up for what’s right and what’s true in the face of corporate and political intimidation. For more information, visit www.projectcensored.org.