END_OF_DOCUMENT_TOKEN_TO_BE_REPLACED

The Killing Game: Selected Writings by the author of Dark Alliance (Paperback) 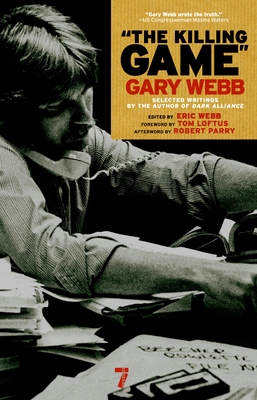 Gary Webb had an inborn journalistic tendency to track down corruption and expose it. For over thirty-four years, he wrote stories about corruption from county, state, and federal levels. He had an almost magnetic effect to these kinds of stories, and it was almost as if the stories found him. It was his gift, and, ultimately, it was his downfall.
He was best known for his story Dark Alliance, written for the San Jose Mercury News in 1996. In it Webb linked the CIA to the crack-cocaine epidemic in Los Angeles during the Iran Contra scandal. His only published book, Dark Alliance is still a classic of contemporary journalism. But his life consisted of much more than this one story, and The Killing Game is a collection of his best investigative stories from his beginning at the Kentucky Post to his end at the Sacramento News & Review. It includes Webb's series at the Kentucky Post on organized crime in the coal industry, at the Cleveland Plain Dealer on Ohio State’s negligent medical board, and on the US military’s funding of first-person shooter video games. The Killing Game is a dedication to his life’s work outside of Dark Alliance, and it’s an exhibition of investigative journalism in its truest form.

An award-winning investigative reporter, GARY WEBB (1955–2004) is best known for his “Dark Alliance” series that linked a Northern California drug ring with the CIA and the United States’ burgeoning crack epidemic. When the story first appeared in 1996 on the website of the San Jose Mercury News, it became an unprecedented internet sensation, receiving up to 1.3 million hits daily. The report was the target of a famously vicious media backlash that ended his career as a mainstream journalist. When Webb told the whole story in the book Dark Alliance, some of the same publications that had vilified him retracted their criticism and praised his courage in telling the truth about one of the worst official abuses in our nation’s history. Others, including his own former newspaper and the New York Times, continued to treat him as an outlaw. Before joining the Mercury News, Webb cut his journalism teeth at the Kentucky Post and Cleveland Plain Dealer. He is the co-recipient of an Investigative Reporters and Editors Award (for a story at the Post about links between the Kentucky coal mining industry and organized crime) and a Pulitzer Prize (as part of a team at the Mercury News covering the 1988 San Francisco Earthquake). Dark Alliance won the 1998 Firecracker Alternative Book Award in the Politics category, and was a finalist for the PEN/Newman’s Own First Amendment Award. In 2014 Webb’s story was adapted into the major motion picture Kill the Messenger. His death in 2004 was ruled a suicide.

“A welcome addition for readers who followed the controversy surrounding Webb and for academic journalism collections.” –Library Journal


“Gary Webb [was] certainly one of the greatest investigative journalists of his time.” –Mark Warren, executive editor of Esquire