Embracing Israel/Palestine: A Strategy to Heal and Transform the Middle East (Paperback) 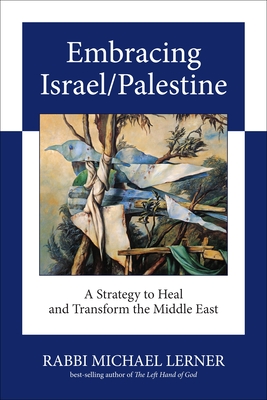 Embracing Israel/Palestine: A Strategy to Heal and Transform the Middle East (Paperback)


On Our Shelves Now
A major modern conundrum is how the Arab/Israel conflict remains unresolved and, seemingly, unresolvable. In this inspirational book, Rabbi Michael Lerner suggests that a change in consciousness is crucial. With clarity and honesty, he examines how the mutual demonization and discounting of each sides’ legitimate needs drive the debate, and he points to new ways of thinking that can lead to a solution.

Lerner emphasizes that this new approach to the issue requires giving primacy to love, kindness, and generosity. It calls for challenging the master narratives in both Israel and Palestine as well as the false idea that “homeland security” can be achieved through military, political, economic, or media domination. Lerner makes the case that a lasting peace must prioritize helping people on all sides (including Europe and the U.S.) and that real security is best achieved through an ethos of caring and generosity toward “the other.” As many spiritual leaders have taught, problems like these cannot be solved at the same level at which they originated—one must seek higher ground, and that becomes a central task for anyone who wants a sustainable peace. Embracing Israel/Palestine is written for those looking for positive, practical solutions to this ongoing dilemma.
Best-selling author Michael Lerner, PhD, is the rabbi of Beyt Tikkun synagogue in San Francisco and the editor of Tikkun magazine, one of the most respected intellectual/cultural magazines in the Jewish world. Lerner, together with his then wife, founded Tikkun in 1986 as “the voice of Jewish liberals and progressives” and as “the alternative to Commentary magazine and the voices of Jewish conservatism.” From the start, the magazine was dedicated to Jewish ethics and to healing and repair of the world. A frequent lecturer and scholar in residence at universities and synagogues around the United States, Canada, and England, Rabbi Lerner was, in 2001, awarded a special PEN Award for his stance in breaking the censorship that effectively exists around Israel-Palestinian matters in the U.S. media. In January of 2002 he founded The Tikkun Community, an international interfaith organization dedicated to peace, justice, non-violence, generosity, caring, love, and compassion, which he chairs with Cornel West. Each year, The Tikkun Community brings hundreds of people to Washington, DC, for a Teach-In to Congress on Middle East Peace. Over the years Lerner has been a guest on numerous national and international television shows, including Larry King Live, CNN News, Meet the Press, and Bill Moyers Journal. He lives in Berkeley, California.
“Rabbi Michael Lerner provides us with a brilliant and hopeful vision of how to transform the Middle East from a cauldron of violence to a vanguard of peace. For several decades Lerner has been a remarkably courageous rabbi, defying the orthodoxies of some in his own community to insist that Biblical teachings require recognizing the equal value to God of both Israelis and Palestinians, and the practical necessity to embrace both Israel and Palestine with compassion and love, thereby challenging the extremists on all sides. In Embracing Israel/Palestine, Lerner presents us with a path to peace that will require our replacing the strategy of domination and war with what Lerner appropriately describes as the far more effective path to homeland security: the strategy of generosity and genuine caring for the well-being of everyone involved. This is practical and effective advice for the world. I hope every American will read this book and apply its lessons for changing how we deal with the Middle East.”
—Jimmy Carter, 39th President of the United States of America and recipient of the 2002 Nobel Peace Prize

“Here is a terrific book by a pioneer of global transformation. Out of love for people—both Israelis and Palestinians as equal creations of God—Rabbi Michael Lerner offers us the deepest way out of the bloody conflict. Not just a political agreement, not a simple “real estate” and power sharing transaction, but an approach that draws from a deep psychological and political understanding of the dynamics of the Middle East and integrates into this a profound way of replacing the current profane and shallow political discourse with a deeper spiritual wisdom that would, if adopted, lead to precisely the consciousness expansion so badly needed. Lerner’s book, like all of his past prophesies, is coming out of a loving heart and a powerful analytic mind. He offers us a strategy of trust that could heal and repair the mentalities of fear and traumas that limit the current perspectives that dominate our politics. This book is a must-read for world and regional leaders as well as every one of us. It is the concept most needed in our time, the voice expressing our universal need, the sound of so many hearts.”
—Avrum Burg, Israeli author, former Chairman of the Jewish Agency and World Zionist Organization, Speaker of the Knesset, and interim President of the State of Israel

“Rabbi Michael Lerner is one of the very few Jewish leaders in the Diaspora who has consistently challenged slavish Jewish pandering to right-wing Israeli chauvinism and messianism, opposed the occupation of the West Bank and the crimes of many Israeli settlers, supported Palestinian rights and justice for the Palestinian people, called for an end to religious coercion and separation of state and synagogue in Israel, but has simultaneously retained a strong commitment to the safety and well-being of Israel and the Jewish people. He has been a fierce critic of those who move from legitimate criticism of Israeli policies to an illegitimate anti-Semitism or attempts to destroy Israel. His voice needs to be heard by Israelis, Palestinians, and all those who seek peace for the Middle East.”
—Uri Avnery, chair of the Israeli peace movement Gush Shalom

“Michael Lerner has been a national leader of the social change movements in the U.S. for the past forty-five years, and the practical wisdom derived from that experience plus his analytic skills honed as a psychotherapist, philosopher, and theologian combine in this book to give Americans, Israelis, and Palestinians a brilliant path to heal the Middle East. This book is at once a major intellectual achievement, a practical guide for peacemakers, and a perspective on politics and social change that everyone needs to read. Share it with your most partisan friends on every side of this issue, and on every side of America’s political divisions, and watch how they begin to broaden and mellow their understanding of the world.”
—Michael Nagler, founder of Peace Studies at UC Berkeley and chair of the Metta Center for Nonviolence

“This is Rabbi Michael Lerner’s magnum opus, but also beyond a doubt a chef d’oeuvre among myriads of studies dedicated to the alas so numerous human catastrophes of our times. It seems to be our un-asked-for Jewish destiny to suffer inanities and absurdities of all historical eras in their most radicalized and brutalized form. The particular inanity behind the Israeli-Palestinian dance macabre is the trademark product of modernity: the unholy trinity and explosive mixture of state-power, nation, and territory. No matter how many books you’ve read on this subject, Embracing Israel/Palestine will give you a new and powerfully insightful perspective that could empower you to play a significant and hopefully effective role in healing this conflict—and in doing so begin to heal the world.”
—Zygmunt Bauman, author of Modernity and the Holocaust, Modernity and Ambivalence, and Postmodernity and its Discontents