Diamonds, Gold, and War: The British, the Boers, and the Making of South Africa (Paperback) 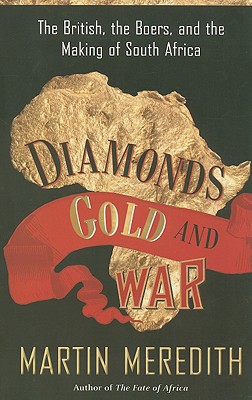 Diamonds, Gold, and War: The British, the Boers, and the Making of South Africa (Paperback)

By Martin Meredith
List Price: $25.99
Our Price: $17.95
(Save: $8.04 31%)
On Our Shelves Now
Southern Africa was once regarded as a worthless jumble of British colonies, Boer republics, and African chiefdoms, a troublesome region of little interest to the outside world. But then prospectors chanced upon the world’s richest deposits of diamonds and gold, setting off a titanic struggle between the British and the Boers for control of the land. The result was the costliest, bloodiest, and most humiliating war that Britain had waged in nearly a century, and the devastation of the Boer republics. The New Yorker calls this magisterial account of those years “[an] astute history.… Meredith expertly shows how the exigencies of the diamond (and then gold) rush laid the foundation for apartheid.”
Martin Meredith is a journalist, biographer, and historian who has written extensively on Africa and its recent history. His previous books include Mandela; Mugabe; Diamonds, Gold, and War; Born in Africa; and The Fate of Africa. He lives near Oxford, England.