Into The Buzzsaw: LEADING JOURNALISTS EXPOSE THE MYTH OF A FREE PRESS (Paperback) 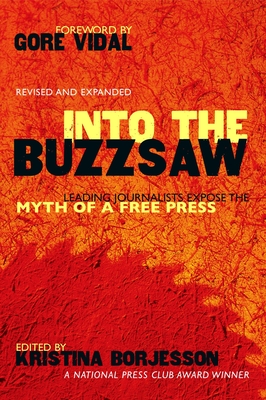 Into The Buzzsaw: LEADING JOURNALISTS EXPOSE THE MYTH OF A FREE PRESS (Paperback)

With a foreword by Gore Vidal and edited by former CBS and CNN producer Kristina Borjesson, this highly acclaimed anthology has been described as "fascinating and disturbing," "uplifting" and "infuriating," and a "penetrating collection of powerful essays."

The original edition won the National Press Club’s Arthur Rowse Award for Press Criticism and was selected by the New York Public Library as one of the most extraordinary titles of 2002.
Kristina Borjesson is an Emmy and Murrow Award-winning investigative reporter, who has worked for CBS and CNN.
"This book should be read by everyone who cares about the truth. The stories make for spellbinding reading as we learn about the trials of investigative reporting, but they also are a potent reminder that in times such as these, we need our "muckrakers" more than ever.”

“Pertinent and timely. . . . Provides a vital perspective on the First Amendment right to a free press and its endangered status today.”

"If members of the general public read this book, they will be appalled... timely and essential reading.”

"All these pieces are interesting, and a couple are fascinating...some of this material is alarming."

"Searing accounts of…personal battles with the pressures of censorship. The writing is, as might be expected, riveting. . .this book is recommended.”

"The first edition of this book appeared during the early months of the Bush administrations' war on terror. Since then, the climate for investigative journalism has only become more repressive. This updated edition...adds about 80 pages of new material...Highly recommended."