The Bandana Republic: A Literary Anthology by Gang Members and Their Affiliates (Paperback) 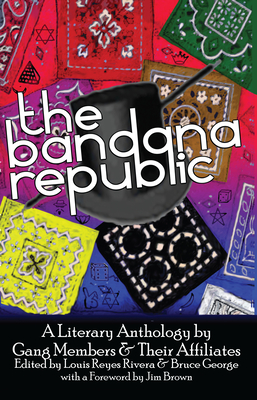 The Bandana Republic: A Literary Anthology by Gang Members and Their Affiliates (Paperback)


On Our Shelves Now
This collection of writings on and by members of urban youth gangs gives voice to an American subculture far richer and more complex than the headlines indicate.

Urban youth gangs are typically viewed as no more than training grounds for thugs and felons. This breakthrough anthology presents a far different picture, revealing present and former gang members' and street activists' artistic impulses, emotional sensitivities, political beliefs, and capacities to assess the social conditions that created them.

The Bandana Republic contains powerful writing: fiction and essays, poetry, and polemics written by adolescents from gangs like the Crips and Bloods and the Mexican Mafia. There's also creative work by ex-gangbangers who have become activists, artists, musicians, and movie stars. J. Sheeler's "Seven Immortals" finds grim poetry in a young girl's gang initiation. Jaha Zainabu's "The Jungle (Blood Territory)" is a lacerating portrait of an LA Blood. Commander's "The Brothas Gunnin'" piercingly profiles a neighborhood--and a world--under siege.
Louis Reyes Rivera was born in Brooklyn, New York, to Puerto Rican parents. He earned his BA from the City College of New York. His collections of poetry include Who Pays the Cost, This One for You, In Control of English, and Scattered Scripture, which won the Poetry Award from the Latin American Writers Institute.

Rivera’s many honors and awards included a New York Foundation for the Arts Fellowship, a Special Congressional Recognition Award, and the CCNY 125th Anniversary Medal. Committed to the progressive and political power of jazz as well as poetry, Rivera appeared at dozens of jazz clubs and festivals and was inducted into the Brooklyn Jazz Hall of Fame. He died in 2012.