The Way to the Spring: Life and Death in Palestine (Hardcover) 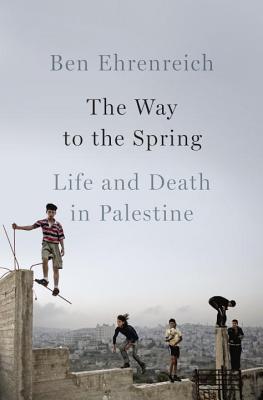 The Way to the Spring: Life and Death in Palestine (Hardcover)


On Our Shelves Now
From an award-winning journalist, a brave and necessary immersion into the everyday struggles of Palestinian life

Over the past three years, American writer Ben Ehrenreich has been traveling to and living in the West Bank, staying with Palestinian families in its largest cities and its smallest villages. Along the way he has written major stories for American outlets, including a remarkable New York Times Magazine cover story. Now comes the powerful new work that has always been his ultimate goal, The Way to the Spring.

We are familiar with brave journalists who travel to bleak or war-torn places on a mission to listen and understand, to gather the stories of people suffering from extremes of oppression and want: Katherine Boo, Ryszard Kapuściński, Ted Conover, and Philip Gourevitch among them. Palestine is, by any measure, whatever one's politics, one such place. Ruled by the Israeli military, set upon and harassed constantly by Israeli settlers who admit unapologetically to wanting to drive them from the land, forced to negotiate an ever more elaborate and more suffocating series of fences, checkpoints, and barriers that have sundered home from field, home from home, this is a population whose living conditions are unique, and indeed hard to imagine. In a great act of bravery, empathy and understanding, Ben Ehrenreich, by placing us in the footsteps of ordinary Palestinians and telling their story with surpassing literary power and grace, makes it impossible for us to turn away.
Ben Ehrenreich is the author of two novels, Ether and The Suitors. His writing has appeared in Harper's, The New York Times Magazine, and the London Review of Books, among other publications. A recipient of the National Magazine Award, Ehrenreich lives in Los Angeles.
"Ben Ehrenreich’s The Way to the Spring: Life and Death in Palestine is a heartbreaking account of the brutal and often surreal realities of life under the Israeli occupation. After reading it, you don’t know whether to despair at the callousness and self-righteousness of human beings, or to wonder at their resilience and creativity." —Yuval Noah Harari, The Guardian, Best Books of 2016

"The Way to the Spring is a riveting and powerful work….Readers near and far who seek greater understanding of how Palestinians live — and the violence they endure — are well served by Ehrenreich’s book.” —Haaretz

“Ehrenreich's haunting, poignant and memorable stories add up to a weighty contribution to the Palestinian side of the scales of history."—New York Times Book Review

“An elegant and moving account . . . [Ehrenreich] brings a novelist’s eye to his subject . . .  It should be read by friends and foes of Israel alike.” —The Economist

“Ben Ehrenreich’s extraordinary new book, The Way to the Spring, chronicles individual Palestinians who live with this existential struggle and, in his words, ‘decline to consent to one’s own eradication, to fight actively or through deceptively simple acts of refusal against powers far stronger than oneself.’ The timing of this particular kind of work could not be better.” —The Brooklyn Rail

“A devastating portrait of unending turbulence in Palestine.” —Kirkus Reviews

“Teeming with heartbreak, irony, and intimate moments of joy . . . [Ehrenreich] paints a vivid portrait of life in three locations: the village of Nabi Saleh, where families have been protesting weekly for the right to use a spring that was theirs until Israeli settlers claimed it, and are consistently met with force; the city of Hebron, a puzzle box of checkpoints and segregated zones, and a powder keg of Jewish and Palestinian resentments; and the village of Umm al-Kheir, where a way of life is quietly dying in the shadow of ever-expanding settlements. With a journalist’s keen eye for detail and a novelist’s ardor for language and its ability to move people, Ehrenreich will incite renewed compassion in his readers.”—Publishers Weekly

“Ben Ehrenreich’s rendition of the Palestinian experience is powerful, deep and heartbreaking, so much closer to the ground than the Middle East reporting we usually see. I wish there were more writers as brave.” —Adam Hochschild

“As heart-breaking as it is, The Way to the Spring is also a strangely joyful book, because Ehrenreich grasps the essence of the Palestinian struggle: not Islam, or even nationalism, but the stubborn refusal of injustice, the restless search for ‘how it would feel to be free,’ as Nina Simone said. The Way to the Spring is more than a work of journalism. It is a freedom song, burning with humanity.”—Adam Shatz

“Though often framed as a ‘foreign policy problem,’ Palestine is a land of miracles and wonders, with ordinary men and women who ‘decline to consent to [their] own eradication’ struggling against a vast landscape to live free lives one day at a time. The land and its people exert an uncanny attraction; everyday struggles achieve an uncanny beauty. In The Way to the Spring, Ben Ehrenreich shapes the uncanny into words and into stories. This is a compelling, essential book.” —Mark Danner

"Sets a new standard for mainstream reporting on Palestine: informed, enlightening, open-hearted. Ehrenreich illuminates the daily human experience of Occupation through the nuances of resistance and solidarity." —Sarah Schulman

"In The Way to The Spring, Ben Ehrenreich accomplishes an extraordinary feat of journalism.  His portraits of Palestinian resistance are luminous; his writing subtle, meticulously documented and deeply human; showing the nuanced empathy that slashes through the best funded government propaganda. This is a necessary book." —Molly Crabapple

“The myriad ordeals suffered by the Palestinian people during the last eighty years are minutely reported here. It’s a chronicle of their daily lives. Read it! It recognises and respects hope.”— John Berger

“It is all too easy to become overwhelmed by the glaring injustice and the difficulties a traveler encounters in the territories occupied by Israel but Ben Ehrenreich resists the temptation. He remains enraged but lucid, eloquent and insightful. Of the voluminous amount of writing about the occupation this is one to treasure. He retains an intimacy with his subject without losing his critical distance. So much has been written about the occupation of the Palestinian territories by Israel but rarely with such vividness, eloquence and success in illuminating complex historical and political realities. This is a superbly intelligent, informative and critical book about one of the fundamental issues of our time.” —Raja Shehadeh

“I really enjoyed The Way To The Spring, which is full of close attention, humane understanding, committed research and memorable novelistic detail. It expresses not just the military and weaponised elements of life under siege and occupation but also the emotional violence wrought on women, children and men who must live in constant fear. Ehrenreich is excellent on the nuances of suffering and survival, which emerge because this is a book which takes a long view, sticking close to its central characters over time, a face, a name and a personality to a situation that is more commonly represented through two minute news reports. The book is to be read with acceptance, subtlety and an open mind - just as it was written.”—Bidisha