The Freedom: Shadows and Hallucinations in Occupied Iraq (Paperback) 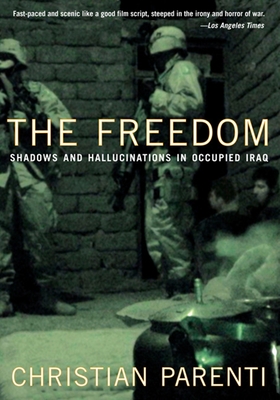 The Freedom: Shadows and Hallucinations in Occupied Iraq (Paperback)

Consistently compared with the work of Hunter S. Thompson and Michael Herr, The Freedom provides a fearless and unsanitized tour of the disastrous occupation of Iraq, in all its surreal and terrifying detail. Drawing on the best tradition of war reporting, here is a rare book that embeds with both sides--the U.S. military and the Iraqi resistance.

Acclaimed journalist Christian Parenti takes us on a high-speed ride along treacherous roads to the centers of the ongoing conflict in Fallujah, Ramadi, and Sadr City through the first year of the occupation. He introduces us to relatives waiting anxiously outside the holding fortress of Abu Ghraib and takes a night drive around Baghdad with the insurgents. He recounts the military's use of drugs and prostitutes, the imperial buffoonery of the Green Zone, and the religious ecstasy of the Shiites. And he allows us to witness, close up and in riveting detail, the cataclysmic violence, rampant gangsterism, and quotidian heroism that is today's Iraq.

As predicted by the San Francisco Bay Guardian, when historians of tomorrow start writing, they will doubtless have copies of The Freedom close at hand.

Christian Parenti is the author of The Soft Cage and Lockdown America. He is a visiting fellow at the CUNY Graduate School's Center for Place, Culture, and Politics, and his articles appear regularly in The Nation. He lives in New York City.