Enemy Combatant: My Imprisonment at Guantanamo, Bagram, and Kandahar (Paperback) 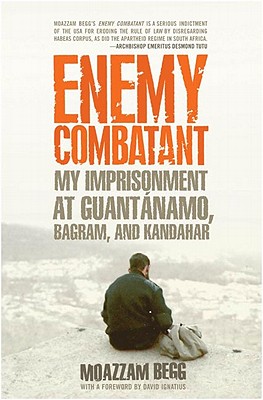 Enemy Combatant: My Imprisonment at Guantanamo, Bagram, and Kandahar (Paperback)

By Moazzam Begg, Victoria Brittain (With)


On Our Shelves Now
The "shocking firsthand account" ("Chicago Sun-Times") of one man's years inside the notorious American prison--and his Kafkaesque struggle to clear his name.
When "Enemy Combatant" was first published in the United States in hardcover in 2006 it garnered sensational reviews, and its author was featured in the "New York Times, the Los Angeles Times," on National Public Radio, and on ABC News. A second generation British Muslim, Begg had been held by the U.S. military for more than three years before being released without charge in January of 2005. His memoir is the first published account by a Guantanamo detainee of life inside the infamous prison.
Writing in the "Washington Post Book World," Jane Mayer described "Enemy Combatant" as "fascinating...Begg provides some ideological counterweight to the one-sided spin coming from the U.S. government. He writes passionately and personally, stripping readers of the comforting lie that somehow the detainees aren't really like us, with emotional attachments, intellectual interests and fully developed humanity."
Recommended by the "Financial Times" and "Tikkun" magazine and a "ColorLines" Editors' Pick of Post-9/11 Books, "Enemy Combatant" is "a forcefully told, up-to-the-minute political story...necessary reading for people on all sides of the issue" ("Publishers Weekly," starred review).