Bad News: How America's Business Press Missed the Story of the Century (Paperback) 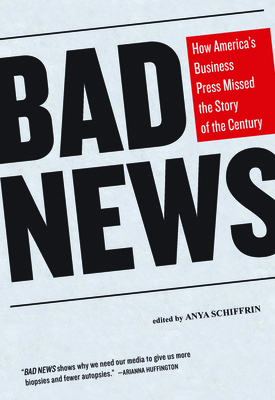 Bad News: How America's Business Press Missed the Story of the Century (Paperback)


On Our Shelves Now
Where was the business press in the weeks and months leading up to the deepest financial crisis since the Great Depression? As our economy unraveled, journalists struggled to keep up with the story of the century, grappling with an alphabet soup of derivatives, backroom deals, and toxic financial instruments. But many fault the media itself for having helped to create the bubble in the first place. Did the press fail its mandate as an engine of truth by buying into the hubris and exuberance of the preceding decades? Bad News is a foundational text for navigating a controversy that will be studied for years to come. With contributions from leading journalists and academics--including Nobel Laureate Joseph Stiglitz, Columbia Journalism Review's Dean Starkman, and Huffington Post business editor Peter S. Goodman--this collection presents a complex debate in a highly accessible format for anyone from curious readers and scholars to journalists themselves. And ultimately, the questions it raises illuminate the heated debate about the media's role as guardians of our democracy.

Anya Schiffrin is the director of the media and communications program at Columbia University's School of International and Public Affairs. She spent ten years working overseas as a journalist in Europe and Asia. She lives in New York City.

"In the thrall of Wall Street and way too cozy with their sources, America's business press missed the biggest story of our timesthe collapse of the U.S. economy. Bad News explains how this happened."
Arianna Huffington

"Though the contributors disagree on whether the media did or did not do its job, all present smart, deeply considered analyses that make for fascinating reading."
Publishers Weekly

"A sort of All the President’s Men for our time, and just the thing to lure bright young people into economics graduate programs and journalism schoolif only there were jobs waiting on the other end."
Kirkus Reviews