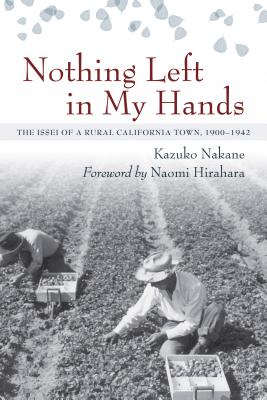 
On Our Shelves Now
Cultural Writing. Asian American Studies. California History. A respected Japanese American historical text now back in print In 1978, Kazuko Nakane interviewed a number of immigrants from Japan who then lived in California's Pajaro Valley. Originally a class project at the University of California, Santa Cruz, her findings were compiled into a book that was published in 1985 and immediately recognized as a classic account of a rural immigrant community. Nakane's book is now back in print in a new edition with a foreword by noted writer Naomi Hirahara. Nakane's detailed research and firsthand interviews with those still living in the Pajaro Valley in the early 1980s piece together a portrait of early Japanese American experiences, from the lives of buranketto men (bachelors who traveled from job to job with little more than a blanket around their shoulders) to the arrival of brides from Japan to the discrimination Japanese faced in the form of anti-immigrant legislation and their banishment to internment camps during World War II. Without Nakane's prescient efforts to preserve these stories, much understanding of early immigrant experience in this country would have been lost. Now, with its republication, NOTHING LEFT IN MY HANDS is again available to those interested in the history of California's immigrants and their contributions to American culture.