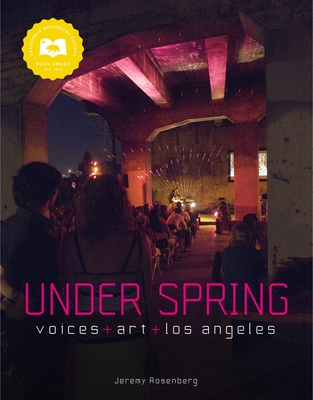 
On Our Shelves Now
The winner of the first CHS Book Award reimagines what a history book can be, and it tells a story all California needs to hear in order to understand itself. Beneath Los Angeles's North Spring Street bridge, a deteriorated concrete landscape was used for years as a homeless encampment and a buffer zone between gang territories. Between 2006 and 2013, artist Lauren Bon and her Metabolic Studio team transformed the underpass into a vibrantly creative space that served as a public square, ceremonial ground, art gallery, community garden, and musical instrument. Under Spring explores the unlikely history of this underpass, revealing the past of Los Angeles itself.

Sixty-six people from all walks of life--artists, scholars, laborers, graffiti artists, urban planners, activists, gang members--chronicle the underpass's many metamorphoses, and in doing so construct an energized account of change and development in LA. We come to understand how agriculture and transportation have shaped the city's growth; how abandoned places serve as refuges for people excluded from society; and how civic pride can arise from a city's blighted core. Under Spring offers a new look at the story of Los Angeles and a new way of telling the story.