West of Eden: Communes and Utopia in Northern California (Paperback) 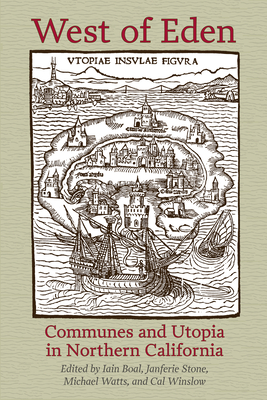 West of Eden: Communes and Utopia in Northern California (Paperback)

In the aftermath of the Vietnam War, a large portion of the population had become disenchanted with the American way of life that they did not feel they belonged to. While some openly revolted in the streets, others took to turning away from the mainstream and headed toward a new world. Utopian visions, manifesting themselves in the form of communes, were aimed at breaking the bonds of capitalism, big business, and the reigning oligarchy and were popping up throughout the country. The San Francisco Bay Area was the hotbed of these communes, and from the Height-Ashbury in San Francisco, east to Berkeley’s protest hub at Sproul Plaza, and south to Oakland’s Black Panther’s communal households, this is an exploration of this unique cultural revolution of the 1960s and 1970s. The history and vision of communal living is investigated in a series of essays aimed at explaining just what these communes were, how lives were lived within them, and what their goals entailed.

Iain Boal is an Irish social historian who is affiliated with the University of California–Berkeley and Birkbeck College–London. He is the author of The Green Machine and the coauthor of Retort’s Afflicted Power. He lives in San Francisco. Janferie Stone is a teacher and writer whose essays have been published in Sustainable Feminisms. She lives in Mendocino, California. Michael Watts is a professor of geology and the chair of development studies at the University of California–Berkeley. He is the former director of the Institute of International Studies. He lives in Santa Cruz, California. Cal Winslow is the author of Labor’s Civil War in California and the coauthor of Albion’s Fatal Tree. He lives in Mendocino, California.

"An amazing place and time that, for all its failures, changed the world—and which finally gets its due in this marvelous collection."  —Richard Walker, University of California–Berkeley, author, The Country in the City

"As a gray army of undertakers gather in Sacramento to bury California's great dreams of equality and justice, this wonderful book, with its faith in the continuity of our state's radical-communitarian ethic, replants the seedbeds of defiant imagination and hopeful resistance."  —Mike Davis, author, City of Quartz

“There are a lot of versions of the sixties, and this is one that isn't stale or familiar, a book by a lot of good writers and original thinkers about how some much older ideas about the commons and the community were tinkered with, enlarged upon, turned into experiments that sometimes succeeded, sometimes failed, but left legacies that mattered. It's also a book about California's tendency to go experimental, idealistic, and eclectic, a fit successor to the classic California's Utopian Colonies that looked at some of the great nineteenth-century experiments.” —Rebecca Solnit, author of Storming the Gates of Paradise

“The counterculture—from the North Beach Parnassus to the underground press—and ‘the Movement’—from Marxists to anarchists—all of it depended on a magnificent base, and here it is described, magnificently: the Oakland breakfast program, the Alcatraz occupation, the Mime troupe, and pot farms, the communes, the collectives, the co-ops of California during the 1960s. On the lam? A bad trip? Burnt out? Cracking up? AWOL? Dropping out? Requiring metamorphosis? These could provide rural and urban alternatives to Cold War, patriarchy, speed-up, or death in the jungle. With roots in previous decades of struggle by trade unions, ethnic enclaves, religious breakaways, and nineteenth century dreams, and with branches in the lore of our own contemporary foodways, child-rearing practices, decision-making and meeting protocols, sexual politics, and DIY culture, the California communards cleared the path. Both veterans and young folk, grey hairs and newbies will find beautiful memoire, authentic experience, and brilliant analysis in these pages West of Eden." —Peter Linebaugh, author of The Magna Carta Manifesto

"This excellent, unique collection comes via the joint efforts of a multidisciplinary team of scholars as well as first-person accounts of activists and others. Together, they provide a large variety of perspectives from the most removed and scholarly to the most personal and passionate regarding communal experiments (including everything from the late Berkeley Co-Op store to deep experiments in communal living around Mendocino) in an area rife with experimental forms of living in the 1960s and after." —CHOICE (September 2012)