Hendrix on Hendrix: Interviews and Encounters with Jimi Hendrix (Musicians in Their Own Words) (Paperback) 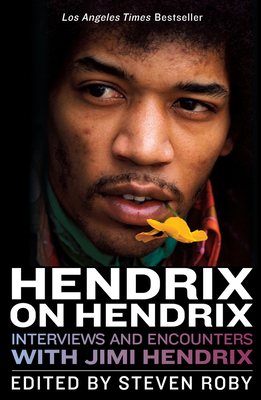 Hendrix on Hendrix: Interviews and Encounters with Jimi Hendrix (Musicians in Their Own Words) (Paperback)


On Our Shelves Now
Hendrix on Hendrix includes the most important interviews from the peak of Jimi Hendrix’s career, 1966 to 1970, carefully selected by one of the world’s leading Jimi Hendrix historians.
In this book Hendrix recalls for reporters his heartbreaking childhood and his grueling nights on the Chitlin’ Circuit. He jokes with the judge and the jury on the witness stand, telling them that the incense in his bag was for hiding bad kitchen odors. He explains to an American TV audience that his concept of “Electric Church Music” is intended to wash their souls and give them a new direction. And in his final interview, just days before his death, he discloses that he wants to be remembered as not just another guitar player.
In addition to interviews from major mainstream publications, Hendrix on Hendrix includes new transcriptions from European papers, the African-American press, and counterculture newspapers; radio and television interviews; and previously unpublished court transcripts—including one of the drug bust that nearly sent him to prison.
Though many respected books have been written about Hendrix, none have completely focused on his own words. This book is as close to a Hendrix autobiography as we will ever see.
Steven Roby is a respected Jimi Hendrix historian-archivist and the author of Black Gold: The Lost Archives of Jimi Hendrix and Becoming Jimi Hendrix. He was the editor and publisher of Straight Ahead: The International Jimi Hendrix Fanzine (1989–1996) and the editor of the Hendrix family’s authorized fanzine, Experience Hendrix. He has also written feature articles and reviews for Guitar World and Goldmine.

“This beautifully edited and annotated collection provides abundant insights into the heart and mind of one of the twentieth century’s most influential artists. Jimi’s story has been told ad nauseam, but often the hype overshadows the human, and the legend subsumes the man. Here we have Hendrix in his own words, with all of his confusion, contradiction, vulnerability, beauty, and brilliance intact.” —Guitar Player

“Hendrix is, by turns, philosophical, psychedelic, and deeply thoughtful in many of hiscomments, as well as aware of his own image as portrayed to the world. . . . This is a valuable and informative book for Hendrix and music fans—a great compendium of primary material on the musical culture of the late 1960s.” —Library Journal

“Roby has done his homework, composing a thorough, thoughtful look at an enigmatic performer. The book excels in providing a portrait, through Hendrix’s own words and the filter of other journalists, of the guitarist as a lonely musician, beset by hangerson, trying to deal with fame and success.” —DownBeat

“Hendrix on Hendrix uncovers a wealth of material that most diehard fans didn’t even suspect existed. By focusing on Jimi’s own words, it gives us revealing insights not only into many corners of his artistic evolution but also into the idiosyncratic man behind the music.” —Richie Unterberger, author of The Unreleased Beatles and White Light/White Heat

“Steven Roby’s expert compilation and editing of rare archival material now provides us with an entertaining and accurate reading of this iconic megastar’s life. In Hendrix on Hendrix we find Jimi at his most fanciful, candid, and vulnerable, especially when talking about himself.” —Paul Caruso, Hendrix’s friend and music collaborator