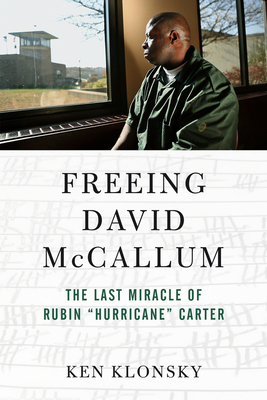 
On Our Shelves Now
For ten years before Rubin “Hurricane” Carter’s death, he and his friend and coauthor Ken Klonsky had been working to help free another wrongfully convicted man, David McCallum. McCallum was eventually exonerated and freed after serving twenty-nine years in prison. This is the story of how Carter and Klonsky, along with a group of committed friends and professionals, managed to secure McCallum’s release. It details their many struggles, from founding an innocence project to take on the case, finding lawyers willing to work pro bono, and hiring a private detective to sift through old evidence and locate original witnesses, to the most difficult part: convincing members of a deeply flawed criminal justice system to reopen a case that would expose their own mistakes when all they wanted to do was ignore the conflicting evidence. A new district attorney willing to reexamine the case, a documentary film, and an op-ed piece in which Carter, on his deathbed, made a plea for McCallum’s release finally turned the tide of justice.

CA
“After you read this gripping tale of a Brooklyn teenager coerced into falsely confessing and freed nearly thirty years later, you will not think about confession evidence or criminal investigations the same way.” —Brandon L. Garrett, author of End of Its Rope: How Killing the Death Penalty Can Revive Criminal Justice and Convicting the Innocent: Where Criminal Prosecutions Go Wrong


“I was the judge who granted a writ of habeas corpus to Rubin ‘Hurricane’ Carter resulting in his freedom after serving nineteen years in prison for a wrongful conviction. After his release we became friends, and he often spoke of his commitment to obtain the release of David McCallum. Freeing David McCallum is the compelling true story of the exoneration of another man wrongly convicted. His miraculous release, after twenty-nine years, demonstrates that fortunately there are those among us who will devote themselves unsparingly to freeing the innocent.” —Judge H. Lee Sarokin, retired