The Coup: 1953, the Cia, and the Roots of Modern U.S.-Iranian Relations (Paperback) 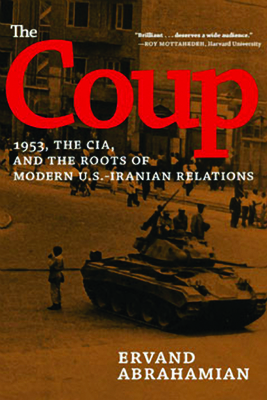 The Coup: 1953, the Cia, and the Roots of Modern U.S.-Iranian Relations (Paperback)


On Our Shelves Now
In August 1953, the CIA orchestrated the swift overthrow of Iran's democratically elected leader and installed Muhammad Reza Shah Pahlavi in his place. Over the next twenty-six years, the United States backed the unpopular, authoritarian shah and his secret police; in exchange, it reaped a huge share of Iran's oil wealth. The blowback was inevitable, as this "relevant, readable" (Kirkus Reviews) history by noted Iran scholar Ervand Abrahamian shows. When the 1979 Iranian Revolution deposed the shah and replaced his puppet government with a radical Islamic republic under Ayatollah Ruhollah Khomeini, the shift reverberated throughout the Middle East and the world, casting a long, dark shadow over U.S.-Iran relations that extends to the present day. In this "well-documented account that] will become indispensable reading for students of the modern Middle East" (Choice), Abrahamian uncovers little-known documents that challenge conventional interpretations of the coup. Offering "new insights into his history-shattering event" (Reason.com), his riveting account transforms America's understanding of a crucial turning point in modern U.S.-Iran relations.

Ervand Abrahamian is distinguished professor of Iranian and Middle Eastern history and politics at Baruch College, City University of New York. He is a co-author (with Bruce Cumings and Moshe Ma'oz) of "Inventing the Axis of Evil" (The New Press).