Pushout: The Criminalization of Black Girls in Schools (Hardcover) 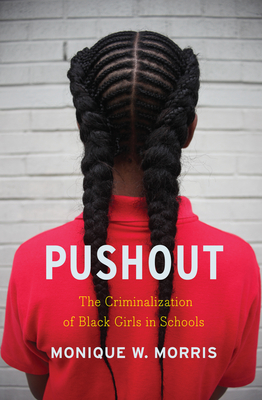 Pushout: The Criminalization of Black Girls in Schools (Hardcover)

By Monique W. Morris
List Price: $27.99
Our Price: $26.95
(Save: $1.04 4%)
On Our Shelves Now
The "powerful" (Michelle Alexander) exploration of the harsh and harmful experiences confronting Black girls in schools, and how we can instead orient schools toward their flourishing

On the day fifteen-year-old Diamond from the Bay Area stopped going to school, she was expelled for lashing out at peers who constantly harassed and teased her for something everyone on the staff had missed: she was being trafficked for sex. After months on the run, she was arrested and sent to a detention center for violating a court order to attend school.

In a work that Lisa Delpit calls "imperative reading," Monique W. Morris chronicles the experiences of Black girls across the country whose complex lives are misunderstood, highly judged--by teachers, administrators, and the justice system--and degraded by the very institutions charged with helping them flourish. Painting "a chilling picture of the plight of black girls and women today" (The Atlantic), Morris exposes a world of confined potential and supports the rising movement to challenge the policies, practices, and cultural illiteracy that push countless students out of school and into unhealthy, unstable, and often unsafe futures.

At a moment when Black girls are the fastest growing population in the juvenile justice system, Pushout is truly a book "for everyone who cares about children" (Washington Post).

Monique Couvson (formerly Monique W. Morris), president of Grantmakers for Girls of Color and founder of the National Black Women's Justice Institute, is the author of several books, including Pushout; Black Stats; Sing a Rhythm, Dance a Blues; and Charisma's Turn (all from The New Press). Her work has been featured by NPR, the New York Times, MSNBC, Essence, The Atlantic, TED, the Washington Post, Education Week, and others. She lives in New York.