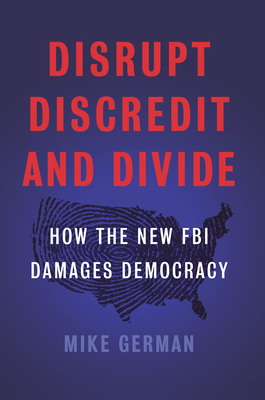 A powerful argument against idealizing the F.B.I. and overlooking its troubling record for the sake of short-term political convenience.
--The New York Times Book Review

Impressively researched and eloquently argued, former special agent Mike German's Disrupt, Discredit, and Divide tells the story of the transformation of the FBI after the 9/11 attacks from a law enforcement agency, made famous by prosecuting organized crime and corruption in business and government, into arguably the most secretive domestic intelligence agency America has ever seen.

German shows how FBI leaders exploited the fear of terrorism in the aftermath of 9/11 to shed the legal constraints imposed on them in the 1970s in the wake of Hoover-era civil rights abuses. Empowered by the Patriot Act and new investigative guidelines, the bureau resurrected a discredited theory of terrorist radicalization and adopted a disruption strategy that targeted Muslims, foreigners, and communities of color, and tarred dissidents inside and outside the bureau as security threats, dividing American communities against one another. By prioritizing its national security missions over its law enforcement mission, the FBI undermined public confidence in justice and the rule of law. Its failure to include racist, anti-Semitic, Islamophobic, and xenophobic violence committed by white nationalists within its counterterrorism mandate only increased the perception that the FBI was protecting the powerful at the expense of the powerless.

Disrupt, Discredit, and Divide is an engaging and unsettling contemporary history of the FBI and a bold call for reform, told by a longtime counterterrorism undercover agent who has become a widely admired whistleblower and a critic for civil liberties and accountable government.

Mike German is a fellow with the Liberty and National Security program at the Brennan Center for Justice. He has worked at the ACLU and served sixteen years as an FBI Special Agent. He is the author of Thinking Like a Terrorist.