Monk!: Thelonious, Pannonica, and the Friendship Behind a Musical Revolution (Hardcover) 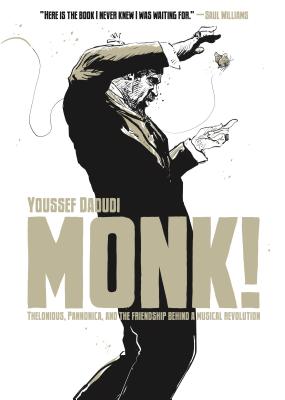 Monk!: Thelonious, Pannonica, and the Friendship Behind a Musical Revolution (Hardcover)

"Read this invigorating graphic narrative, then—quickly, before the spell breaks!—play one of Monk's records." —Saul Williams

She is Kathleen Annie Pannonica de Koenigswarter, a free-spirited baroness of the Rothschild family. He is Thelonious Sphere Monk, a musical genius fighting against the whims of his troubled mind. Their enduring friendship begins in 1954 and ends only with Monk’s death in 1982.

Set against the backdrop of New York during the heyday of jazz, Monk! explores the rare alchemy between two brilliant beings separated by an ocean of social status, race, and culture, but united by an infinite love of music. This breathtaking graphic novel by Youssef Daoudi beautifully captures the life of the “the high priest of bop” in spontaneous, evocative pen and ink that seems to make visible jazz itself.

Youssef Daoudi is a comic artist and illustrator living in France. He worked as an art director for multinational advertising firms for fifteen years before committing himself to writing and drawing graphic novels, including Monk!. He is an avid traveler, and New York is one of the most inspiring cities he’s ever visited.

"Daoudi’s palate for the book is tightly contained, which gives the art and the story a chance to shine... It’s a must-read title for people who love jazz, and a wonderful experience even for readers who couldn’t name a single jazz musician off the top of their heads. —Paste

"The panel layout forces readers to stay focused, and the artwork is beautiful, with colors that are somehow at once vibrant and muted... A thorough and superb biography, for most nonfiction collections." —School Library Journal, starred review

"Daoudi weaves conversations, memories, and dreamlike sequences together using a variety of panel sizes, perspectives, and visual shorthand to create a lively and exciting biography that is as dynamic and complex as its subjects. Captivating graphic nonfiction." —Booklist, starred review