END_OF_DOCUMENT_TOKEN_TO_BE_REPLACED

The Hero In The Helmet: Colin Kaepernick (Paperback) 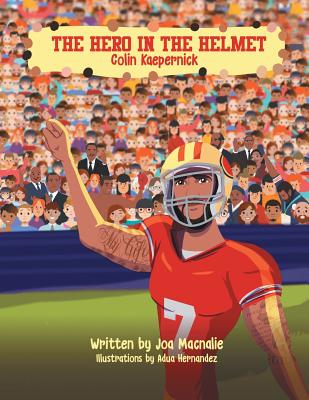 The Hero in the Helmet is a biographical children's short-story, written in a third-person narrative, to educate both children and parents alike on the life and legacy of super-star athlete Colin Kaepernick. Colin Kaepernick or 'Kap' as he is affectionally called, was a gifted quarterback for the San-Francisco 49-ers who at the young age of twenty-five lead his team to the NFC championships on his first full season as a starter. His 16-of-21 passes for 233 yards, and one touchdown performance defeated the Atlanta Falcons, advancing them to super Bowl XLVII in New Orleans against the Baltimore Ravens. This was San Francisco's first super bowl appearance since 1994.

In 2016, Colin Kaepernick became a national figure when he silently took a knee during the singing of The National Anthem; a sign of protest against racial injustice. Kap's actions started a political movement that stirred up a variety of responses from anger, hatred, and opposition to compassion, respect and support. The NFL responded by keeping Kap as a free agent and has not made it to any roster since, despite his undeniable skill and athletic record.

Kaepernick changed platforms from football field to stages as he picked up public speaking to make clear that his decision for kneeling is and was not a sign of disrespect to the United States flag nor to military veterans, but a demonstration against racial injustice, systemic oppression, police brutality, and the lack of accountability for wrongful police murders in court against black and minority civilians.

Colin Kaepernick remains active in his work as a social advocate against racial inequality, and because of his unwavering leadership has been awarded The Len Eshmont Award (voted on by his teammates) who best exemplifies the inspirational and courageous play of Len Eshmont, Best Breakthrough Athlete, Eason Monroe Courageous Advocate Award, The Sports Illustrated Muhammad Ali Legacy Selfless Award, and The GQ Citizen of the Year Award. In addition, he has pledged one million dollars of his own money to empower oppressed communities.