We Shall Not Be Moved: The Jackson Woolworth's Sit-In and the Movement It Inspired (Paperback) 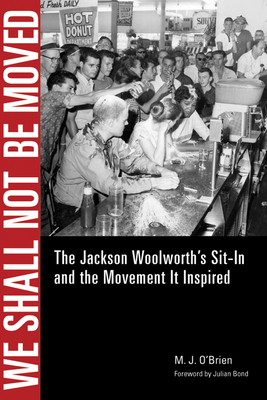 We Shall Not Be Moved: The Jackson Woolworth's Sit-In and the Movement It Inspired (Paperback)

Once in a great while, a photograph captures the essence of an era: Three people--one black and two white--demonstrate for equality at a lunch counter while a horde of cigarette-smoking hotshots pour catsup, sugar, and other condiments on the protesters' heads and down their backs. The image strikes a chord for all who lived through those turbulent times of a changing America. The photograph, which plays a central role in the book's perspectives from frontline participants, caught a moment when the raw virulence of racism crashed against the defiance of visionaries. It now shows up regularly in books, magazines, videos, and museums that endeavor to explain America's largely nonviolent civil rights battles of the late 1950s and early 1960s. Yet for all of the photograph's celebrated qualities, the people in it and the events they inspired have only been sketched in civil rights histories. It is not well known, for instance, that it was this event that sparked to life the civil rights movement in Jackson, Mississippi, in 1963. Sadly, this same sit-in and the protest events it inspired led to the assassination of Medgar Evers, who was leading the charge in Jackson for the NAACP. We Shall Not Be Moved puts the Jackson Woolworth's sit-in into historical context. Part multifaceted biography, part well-researched history, this gripping narrative explores the hearts and minds of those participating in this harrowing sit-in experience. It was a demonstration without precedent in Mississippi--one that set the stage for much that would follow in the changing dynamics of the state's racial politics, particularly in its capital city.
M. J. O'Brien is a writer and researcher who served for twenty-five years as the chief communications and public relations officer for a national not-for-profit cooperative.