The Power Worshippers: Inside the Dangerous Rise of Religious Nationalism (Hardcover) 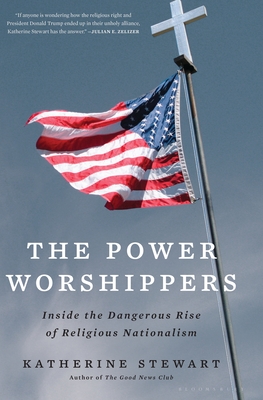 The Power Worshippers: Inside the Dangerous Rise of Religious Nationalism (Hardcover)

For readers of Democracy in Chains and Dark Money, a revelatory investigation of the Religious Right’s rise to political power.

For too long the Religious Right has masqueraded as a social movement preoccupied with a number of cultural issues, such as abortion and same-sex marriage. In her deeply reported investigation, Katherine Stewart reveals a disturbing truth: this is a political movement that seeks to gain power and to impose its vision on all of society. America’s religious nationalists aren’t just fighting a culture war, they are waging a political war on the norms and institutions of American democracy.

Stewart pulls back the curtain on the inner workings and leading personalities of a movement that has turned religion into a tool for domination. She exposes a dense network of think tanks, advocacy groups, and pastoral organizations embedded in a rapidly expanding community of international alliances and united not by any central command but by a shared, anti-democratic vision and a common will to power. She follows the money that fuels this movement, tracing much of it to a cadre of super-wealthy, ultraconservative donors and family foundations. She shows that today’s Christian nationalism is the fruit of a longstanding antidemocratic, reactionary strain of American thought that draws on some of the most troubling episodes in America’s past. It forms common cause with a globe-spanning movement that seeks to destroy liberal democracy and replace it with nationalist, theocratic and autocratic forms of government around the world. Religious nationalism is far more organized and better funded than most people realize. It seeks to control all aspects of government and society. Its successes have been stunning, and its influence now extends to every aspect of American life, from the White House to state capitols, from our schools to our hospitals.

The Power Worshippers is a brilliantly reported book of warning and a wake-up call. Stewart’s probing examination demands that Christian nationalism be taken seriously as a significant threat to the American republic and our democratic freedoms.

Katherine Stewart is the author of The Power Worshippers: Inside the Dangerous Rise of Religious Nationalism. She writes about politics, policy, and religion for The New York Times, Washington Post, NBC, and The New Republic. Her previous book, The Good News Club, was an examination of the religious right and public education.

"Ambitious . . . The book’s title is a pun, and it’s an apt one. What stands out the most from this gripping volume is how a reverence for authority—if the right person is in charge—is encoded into the various strands of this movement. . . . The Power Worshippers is required reading for anyone who wants to map the continuing erosion of our already fragile wall between church and state." - The Washington Post

"Stewart has produced both a warning about the influence of religious nationalists and, in a brisk epilogue, the beginnings of a handbook about combating religious nationalists. The tools of the counter-revolution she hopes will stanch the religious nationalist drive to power are [an end to] gerrymandering, fresh initiatives to enforce voter rights, and vigilance against abuses at the ballot box. . . . This is a book that is both an examination of a new social and cultural phenomenon—and a call for action." - The Boston Globe

“This is not a ‘culture war.’ It is a political war over the future of democracy. This is a bold claim, but one that Stewart backs up with deep reporting on the religious right’s infrastructure.” —Linda Greenhouse, New York Review of Books

"As November’s election looms, The Power Worshippers is a timely political exposé, indispensable reading for 2020 voters regardless of their religious beliefs. . . . With more than a decade of experience covering conservative Christianity, Stewart is adept at conveying the gravity of its aims. She goes deeper than any facile culture-wars discourse, digging into the evangelical right’s fervor to gain political power and privilege in the name of religious liberty." - Texas Observer

"Chilling . . . Much of what Stewart recounts would seem incredible were it not presented through extensive quotations from speeches by, documents of, and conversations with movement leaders." - Foreign Affairs

"Stewart has accomplished the near-impossible in a volume lacking doorstop heft: a truly informative and smooth read about a sprawling movement and the many ways it exercises power over the lives of all Americans. If you’re not alarmed by the time you reach the last page—if not long before—you may lack a pulse altogether." - Democracy Journal

"[The Power Worshippers] effectively reminds us that even though the religious right comprises a minority of the American populace, it has become very effective at insinuating itself in the national, state, and local seats of power . . .The answer [is not] to reinvent America—rather, it’s to reinvigorate its democratic roots . . . a powerful and persuasive argument, one that Stewart illuminates with an array of history and political reporting, effectively weaving a portrait of our current grim situation with the threads from the past." - Daily Kos

"Bringing some clarity to the make-up of the Christian nationalist movement is just one of the myths Stewart busts in her upcoming book . . . Equally important for us to understand is that this movement isn’t simply about culture wars." - Washington Monthly

"[Stewart is] a seasoned investigative journalist, weaving together historical analysis and on-the-ground reporting to create engaging narratives . . . offer[ing] a behind-the-scenes view of how an interconnected network of think tanks, advocacy groups, and pastoral organizations joined forces with global anti-democratic religious nationalists long before entities like Russia became players in the 2016 presidential election." - The Humanist

"A must-read for those interested in the influence of religion on politics and the effects on our political institutions." - Library Journal, starred review

"A timely and useful introduction to the single most organized force in American politics today . . . One of the biggest strengths of The Power Worshippers is its close attention to political economy. In fact, Stewart’s entire body of work demonstrates how the Christian nationalist movement has successfully redirected public resources to fund their own private religious initiatives, like the public financing of religious charter schools through tax breaks and grant programs." - Baffler

"Stewart provides a comprehensive, chilling look at America’s Christian nationalist movement, which she convincingly portrays as a highly organized political coalition that has ‘already transformed the political landscape and shaken the foundations upon which lay our democratic norms and institutions.’ . . . Her insightful investigation places the power of Christian nationalism into full context." - Publishers Weekly

"[The] thoroughly researched facts as she lays them out are hard to argue with . . . [an] undeniably powerful examination of the Christian right's political motives." - Kirkus Reviews

"A more comprehensive, if still compact, journey through the labyrinth of interlocking organizations and personalities that form the ecosystem of a movement that embraces ‘identity-based authoritarian rule over pluralistic, democratic processes,’ and seeks to transform the U.S. to serve that vision . . . A journalist who has spent a decade covering the activities of the Christian Right painstakingly exposes the movement's effort to undermine the United States' pluralistic democracy." - Shelf Awareness

"The Power Worshippers is a comprehensive, if compact, journey through the labyrinth of interlocking organizations and personalities that form the ecosystem of a movement that embraces ‘identity-based authoritarian rule over pluralistic, democratic processes,’ and seeks to transform the U.S. to serve that vision." - Shelf Awareness for Readers, starred review

"Invaluable . . . The Power Worshippers should be read by all Americans who believe in democracy and the separation of church and state, especially as the 2020 elections nears." - New York Journal of Books

"Eye-opening . . . We learn, here, from a committed deep researcher—years of devoted travel, interviews, reading—that this movement is a good deal more dedicated and scarily more ambitious than the rest of us have so far noticed." - Sullivan County Democrat

"If anyone is wondering how the Religious Right and President Donald Trump ended up in their unholy alliance, Katherine Stewart has the answer. The Power Worshippers provides a fascinating x-ray into the political eco-system of religious conservatives who threaten the health of our democratic institutions. She argues that this movement is much more about power, money and invented pasts than ethics, theology and God. Stewart’s book is an important contribution to our understanding of contemporary politics." - Julian E. Zelizer, author of THE FIERCE URGENCY OF NOW

"Katherine Stewart knows from years of investigative reporting why the Trumpvangelicals who use faith to whitewash corruption are a preeminent threat to American democracy. Read The Power Worshippers and you will understand why nothing is more important to the health of our common life than challenging the false moral narrative of religious nationalism." - William J. Barber, II, President of Repairers of the Breach & Co-Chair of the Poor People’s Campaign: A National Call for Moral Revival

"Katherine Stewart presents chilling evidence that millions of American churchgoers are being inflamed and exploited by a cynical, well-funded alliance of power seekers. Read The Power Worshippers to understand what the relentless political agitation against abortion and homosexuality has really achieved—and for whom." - Nancy MacLean, author of DEMOCRACY IN CHAINS

"Employing a sharp investigative eye, Stewart connects the dots between radical theocratic groups that want to create an officially ‘Christian nation’ and extreme free-market libertarians who despise social programs for the poor, taxes and public institutions. After reading this book, you should be prepared to fight back like nothing less than our democracy is at stake – because it is." - Rob Boston, Americans United for Separation of Church and State

"Katherine Stewart takes on the enormous task of revealing who exactly is pulling the levers of power in our communities, statehouses, and federal government. A must-read." - Andrew Whitehead, author of TAKING AMERICA BACK FOR GOD

"We are faced with a religious movement that is fundamentally opposed to pluralism and has long-term plans to transform America into a Christian nation. An adept, highly readable and important work." - Julie Ingersoll, author of BUILDING GOD'S KINGDOM

"The Power Worshippers provides a detailed explanation of how the Religious Right has used its power to advance religion-based government in harmful ways." - Justia

"Both [The Power Worshippers and Shadow Network] have done impressive archival and on-the-ground research. These books are two of the fullest accounts of Christian nationalism to date. . . . Together, they paint a multidimensional portrait of the politicization of Christian faith that has neither a single source nor a majority of support among American Christians, despite its disproportionate impact." - Christian Century