Joni on Joni: Interviews and Encounters with Joni Mitchell (Musicians in Their Own Words) (Paperback) 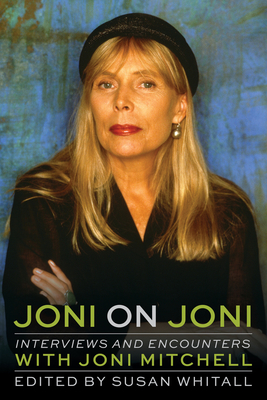 Joni on Joni: Interviews and Encounters with Joni Mitchell (Musicians in Their Own Words) (Paperback)


On Our Shelves Now
Joni Mitchell was a solidly middle-class bohemian; an anti-feminist who loved men but scorned free love; a female warrior taking on the male music establishment. She was both the party girl with torn stockings and the sensitive soul. Her earthy, poetic lyrics and the unusual melodic intervals traced by that lissome voice earned her the status of a pop legend. Joni on Joni is a chronologically arranged anthology of Mitchell’s most illuminating interviews, spanning the years 1966 to 2014. Included are revealing pieces from her early years in Canada and Detroit, along with influential articles such as Cameron Crowe’s Rolling Stone piece. Interspersed throughout are key quotes from dozens of additional Q&As. Together, this material paints a revealing picture of the artist—bragging and scornful, philosophical and deep, but also a beguiling flirt.
Susan Whitall was a writer/editor at Creem magazine in Detroit and a music and feature writer at the Detroit News.