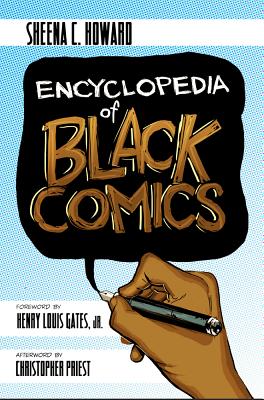 
On Our Shelves Now
The Encyclopedia of Black Comics, focuses on people of African descent who have published significant works in the United States or have worked across various aspects of the comics industry. The book focuses on creators in the field of comics: inkers, illustrators, artists, writers, editors, Black comic historians, Black comic convention creators, website creators, archivists and academics—as well as individuals who may not fit into any category but have made notable achievements within and/or across Black comic culture.
Sheena C. Howard is Associate Professor of Communication at Rider University and an award-winning author, including a 2014 Eisner Award winner for her co-edited book, Black Comics: Politics of Race and Representation. In 2016, she directed, produced and wrote the documentary Remixing Colorblind, and she has bylines in The Huffington Post, Curve Magazine, Philadelphia Inquirer and more.
"Encyclopedia of Black Comics serves as a treasure map, and interested readers can follow the trails put forward by Howard to seek out African-American work—past, present, and future." —Peter Dabenne, Foreword Reviews

"The newly published Encyclopedia of Black Comics is something the world has never seen before." —Tanasia Kenney, Atlanta Black Star

"The anthology cuts across many areas, such as print newspapers, journalism, hip hop, and the use of social media as a platform to share the stories and experiences of black creatives through comics." —Ernest Owens, Philadelphia Magazine

"With Luke Cage and Black Lightning coming to the small screen, there’s no better time than now for an Encyclopedia of Black Comics. The encyclopedia is also a reminder of how many Black superheroes and villains we still haven’t seen on the small and big screen. Marvel and DC, we hope you’re listening."—Evette Dionne, Bitch Media

"In this book, Howard celebrates the firsts, the bests, the noteworthies, and the historic." —Terri Schlichenmeyer, North Dallas Gazette

"While there’s a chance that you’ve heard of many of the people included in this book, author Sheena C. Howard didn’t just keep things familiar: she dug back into history for several of her profiles, and she also includes people who are on the periphery of — but important to — today’s comic book world." —Terri Schlichenmeyer, Philadelphia Tribune

"Honoring a diverse array of black contributions to the field of comics the Encyclopedia of Black Comics welcomingly schools its readers on how various publishers, writers, artists, letterers, inkers, editors, historians and more have influenced the overall world of black comics. For me, it’s the best reference for black comics on the market. Ever." —Dr. Katie Monnin, diamondbookshelf.com