Windows On The World (Paperback) 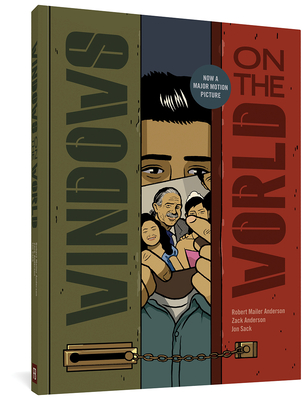 Windows On The World (Paperback)

Based on the screenplay of the award-winning 2019 film, this graphic novel chronicles a son’s search for his undocumented immigrant father, who was working in the Twin Towers, in the wake of 9-11.

An undocumented immigrant father has been bussing tables at the famous Windows on the World restaurant to support his family in Mexico. Then, tragedy strikes. His family hears no word for weeks. Refusing to give up hope, they send young Fernando on a quixotic mission across the border to find his father and bring him home. Along the way, Fernando experiences a warm embrace from fellow immigrants and a cold shoulder from The City That Never Sleeps. Told with empathy and nuance, this emotionally resonant story reflects on how the pains of our recent past have shaped the character of America.

Robert Mailer Anderson is a San Francisco-based writer, producer, and activist. He has written a novel, Boonville, and a play entitled The Death of Teddy Ballgame. He cowrote the films Pig Hunt and Windows on the World. He is a San Francisco Library Laureate, among other honors.

Jon Sack is a US- and UK-based artist and writer. He graduated with an MFA from Goldsmiths College in 2006, and his work has been published and covered internationally. His comic books include La Lucha, which is about violence in Juárez and the lawyers working to combat it, and Iraqi Oil For Beginners, about the complicated history of oil in Iraq.

Fierce and generous, moving and unpredictable, Windows on the World is the story of the trouble we're all in, and the dream of how we just might get out.

A stirring piece of narrative art, with a graphic eloquence conveying both intensity and true compassion.
— Jonathan Lethem, Motherless Brooklyn

A much needed and fresh look at Latinx life.
— Ishmael Reed

An affecting road drama written with a mix of delicacy and grit, Windows on the World examines the idea that [in the days following 9/11] the uncertainty for families of immigrants, particularly undocumented ones, was elevated in a way that many white Americans can’t conceive.

One of the most topical, relevant, and necessary comics out there right now.
— Solrad