Without Separation: Prejudice, Segregation, and the Case of Roberto Alvarez (Hardcover) 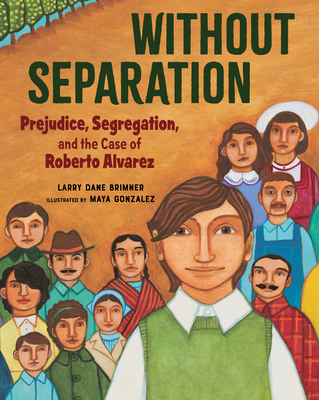 Without Separation: Prejudice, Segregation, and the Case of Roberto Alvarez (Hardcover)

This important yet little-known civil rights story focuses on Roberto Alvarez, a student whose 1931 court battle against racism and school segregation in Lemon Grove, California, is considered the first time an immigrant community used the courts to successfully fight injustice. A must-read for young activists, or for anyone interested in standing up for what's right.

Roberto Alvarez’s world changed the day he could no longer attend Lemon Grove Grammar School in the small, rural community where he lived near San Diego, California. He and the other Mexican American students were told they had to go to a new, separate school—one where they would not hold back the other students. But Roberto and the other students and their families believed the new school’s real purpose was to segregate, to separate. They didn’t think that was right, or just, or legal.

Based on true events, this picture book by Sibert award-winning author Larry Dane Brimner and Pura Belpré honor award-winning illustrator Maya Gonzalez follows Roberto and the other immigrant families on their journey.
Larry Dane Brimner is the award-winning author of a number of civil rights and social justice titles for Calkins Creek, including Finding a Way Home: Mildred and Richard Loving and the Fight for Marriage Equality; Accused! The Trials of the Scottsboro Boys: Lies, Prejudice, and the Fourteenth Amendment; and Blacklisted!: Hollywood, the Cold War, and the First Amendment. Visit brimner.com.

Maya Gonzalez is an artist, author and progressive educator whose work focuses on the use of art and story as powerful tools of reclamation and transformation. She has illustrated over 20 award-winning children's books, several of which she also wrote. Her book My Colors, My World won the Pura Belpré Award Honor and her most recent picture book, Call Me Tree was listed in Kirkus' Best Picture Books of 2014 that Celebrate Diversity.
★ "Separation is never equal. When the Lemon Grove School District’s board of trustees decided to expel every one of the 75 students who were of Mexican American descent in order to establish an all-White student body, the Lemon Grove Neighbor’s Committee—Comité de Vecinos de Lemon Grove—decided to take action. Brimner’s straightforward narrative follows Roberto Alvarez from his return to school after Christmas vacation only to be told he was no longer welcome to the day he was able to receive the same education as the White students. The substantial author’s note places this case in context with other desegregation cases in the U.S.—particularly in California. Gonzalez’s colorful and detailed mural-esque illustrations make the historical flavor of the times accessible. A critical contribution to discussions of equal access and of systemic racism."—Kirkus Reviews, starred review

"Brimner, known for his excellent, detailed books for older kids on the civil rights movement during the 1950s and ’60s, now addresses a younger audience with a simplified narrative in the main text, followed by a more complete account in the lengthy author’s note. Gonzalez’s richly colored illustrations, painted in acrylics, create a series of striking tableaux. Underscoring the importance of confronting discrimination, this picture book highlights a little- known court case that became a precedent for the Supreme Court’s landmark 1954 Brown v. Board of Education decision."—Booklist

"[Larry Dane Brimner]...outline(s) the tale of Roberto Alvarez, a California-born student of Mexican heritage who, along with his Mexican and Mexican American peers, was instructed to attend a school separate from white students in 1930s California, resulting in the landmark case Roberto Alvarez v. the Board of Trustees of the Lemon Grove School District, the first court decision successfully desegregating schools. Gonzalez’s acrylic paintings on archival paper, offering thickly outlined figures of varying age and skin tone rendered in a vivid mural-like style, set this biography apart. Back matter includes an author’s note with photographs, sources, source notes, acknowledgments, and picture credits." —Publishers Weekly

"[Without Separation]...presents an important look at one of the cases that eventually led to the historic U. S. Supreme Court case Brown v. Board of Education of Topeka in 1954. A recommended purchase for large collections." —School Library Journal

"Without Separation is written with heartfelt respect and is buoyed by Larry Brimner’s consummate research. Maya Gonzalez's art is a glorious match to this poignant and celebratory account about our nation's first successful school desegregation case. A must-have for classrooms, school libraries, and readers who honor diversity." —Pam Muñoz Ryan, Newbery Honor and Orbis Pictus Award-winning author

“Another powerful story from the distinguished Larry Dane Brimner, which celebrates those who fought against past discrimination, and encourages today’s young readers to step up, too.” —Kirby Larson, Newbery Honor-winning author

“Brimner skillfully weaves threads of the past to recount the powerful story of Roberto Alvarez, reminding young readers that justice is the ripple of change.” —Rafael López, Pura Belpré Award-winning illustrator

“Careful research and vibrant illustrations combine to tell the inspiring story of a Mexican American community that stood up against prejudice and school segregation. Without Separation depicts an important yet almost unknown piece of American history that will resonate with young readers nowadays.” —Duncan Tonatiuh, Pura Belpré and Sibert Award-winning author and illustrator

“As always, Larry Dane Brimner unearths the forgotten chapters from America’s history and brings them to light. This powerful narrative is captured in Maya Gonzalez's richly textured folk art illustrations. Roberto Alvarez’s story celebrates the power young voices have in changing our world for the better.” —Lesa Cline-Ransome, author of Before She Was Harriet