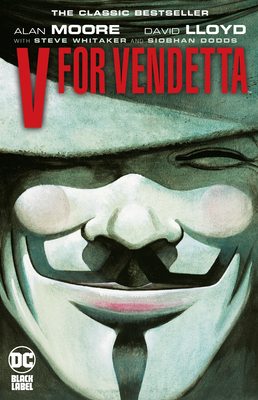 
On Our Shelves Now
The graphic novel that inspired the hit Warner Bros. motion picture and DVD from the Wachowskis, the directors of THE MATRIX films and SPEED RACER.

In the near future, England has become a corrupt, totalitarian state, opposed only by V, the mystery man wearing a white porcelain mask who intends to free the masses through absurd acts of terrorism.
Alan Moore is perhaps the most acclaimed writer in the graphic story medium, having garnered countless awards for works such as Watchmen, V for Vendetta, Swamp Thing and Miracleman. He is also the mastermind behind the America's Best Comics line, through which he has created (along with many talented illustrators) The League of Extraordinary Gentlemen, Promethea, Tom Strong, Tomorrow Stories and Top Ten.