END_OF_DOCUMENT_TOKEN_TO_BE_REPLACED

Soldier Box: Why I Won't Return to the War on Terror (Paperback) 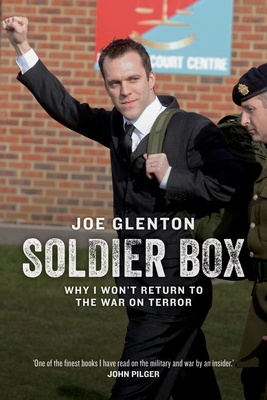 "I looked around my cell and saw the sheet of paper taped to the door at chest height. It listed everything in the room, chair, bed, soldier box … For a moment I thought it meant the cell itself; a box to put soldiers in."

When the War on Terror began, Briton Joe Glenton felt compelled to serve his nation. He passed through basic training and deployed to Afghanistan in 2006. What he saw overseas left him disillusioned, and he returned home increasingly political and manifesting symptoms of post-traumatic stress disorder.

When he refused to return for a second tour, he was denied his right to object and called “a coward and a malingerer.” He went absent without leave and left the country, returning later to the UK voluntarily to campaign against the wars. The military accused him of desertion and threatened years in prison.

Soldier Box tells the story of Glenton’s extraordinary journey from a promising soldier to a rebel against what he came to see as unjustified military action.

Joe Glenton was born in Norwich, Great Britain, in 1982. He joined the British Army in 2004. Since his release he has campaigned against the wars and has written for the Guardian, Mirror, New Internationalist, Military History Monthly, and Counterfire. He is currently studying International Relations.

“It takes as much courage to stand up against the Army as it does to go to war. History is made by people prepared to make that kind of sacrifice.”—Tony Benn, former British Member of Parliament

“Joe Glenton is the really brave soldier: the one who refused to fight in an unjust war and suffered imprisonment as a result. Above the sound of gunfire it is his story that deserves to be heard.”—John Rees, cofounder of the Stop the War Coalition