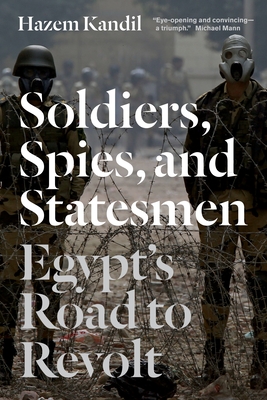 
On Our Shelves Now
One of the most momentous events in the Arab uprisings that swept across the Middle East in 2011 was the overthrow of President Hosni Mubarak. As dramatic and sudden as this seemed, it was only one further episode in an ongoing power struggle between the three components of Egypt’s authoritarian regime: the military, the security services, and the government. A detailed study of the interactions within this invidious triangle over six decades of war, conspiracy, and sociopolitical transformation, Soldiers, Spies, and Statesmen is the first systematic analysis of recent Egyptian history.

This paperback edition, updated to incorporate events in 2013, provides the background necessary to understanding how the military rebranded itself as the defender of democracy and ousted Mubarak’s successor, Muhammad Morsi. Impeccably researched and filled with intrigue, Soldiers, Spies, and Statesmen is an indispensable guide for anyone trying to fathom what this latest development means for Egypt’s future.
Hazem Kandil is a Lecturer in Sociology and St. Catharine’s College Fellow at Cambridge University. He has also taught at the American University in Cairo and the University of California, Los Angeles.
"Soldiers, Spies, and Statesmen serves as an indispensable read for anyone seeking clarity on the ongoing struggle between the military, security and political apparatuses of Egypt's autocracy."—World Policy Journal

"Hazem Kandil has written a brilliant revisionist account of the origins of the Egyptian Revolution. He focuses on how the regime’s repressive forces fell apart, making revolution possible. I found it eye-opening and convincing—a triumph."—Michael Mann, author of The Dark Side of Democracy

"This is a fascinating book that should be required reading for anybody interested in Egypt’s past and what happens next. It gives a unique insight into what the military and security forces were thinking and doing, and why they were not the monolithic force that most had imagined."—Patrick Cockburn, author of The Occupation