Private Island: Why Britain Now Belongs to Someone Else (Paperback) 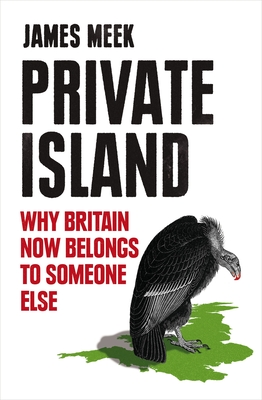 Private Island: Why Britain Now Belongs to Someone Else (Paperback)


On Our Shelves Now
“The essential public good that Margaret Thatcher, Tony Blair and now Cameron sell is not power stations, or trains, or hospitals. It’s the public itself. it’s us.”

In a little over a generation the bones and sinews of the British economy – rail, energy, water, postal services, municipal housing – have been sold to remote, unaccountable private owners, often from overseas. In a series of brilliant portraits the award-winning novelist and journalist James Meek shows how Britain’s common wealth became private, and the impact it has had on us all: from the growing shortage of housing to spiralling energy bills.

Meek explores the human stories behind the incremental privatization of the nation over the last three decades. He shows how, as our national assets are sold, ordinary citizens are handed over to private tax-gatherers, and the greatest burden of taxes shifts to the poorest. In the end, it is not only public enterprises that have become private property, but we ourselves.

Urgent, powerfully written and deeply moving, this is a passionate anatomy of the state of the nation: of what we have lost and what losing it cost us – the rent we must pay to exist on this private island.
James Meek is a Contributing Editor of the London Review of Books. He is the author of six novels published in the UK, US, France and Germany, including The People’s Act of Love, which was longlisted for the Booker Prize and won the Ondaatje Prize and Scottish Arts Council Award. We Are Now Beginning Our Descent won the 2008 Le Prince Maurice Prize and The Heart Broke In was shortlisted for the 2012 Costa Prize. In 2004 he was named the Foreign Correspondent of the Year by the British Press Awards and he contributes regularly to the Guardian, New York Times and International Herald Tribune.
“This is the definitive account of how so much has gone and continue to go wrong with Britain’s institutions. Don’t read it all at once – it’s too depressing.”
—Joan Bakewell, New Statesman Books of the Year

“One of the most powerful critiques of the mess that is Britain’s economy.”
—Aditya Chakrabotty

“Do yourself a favour: read Private Island and find out what has really happened in Britain over the past 20 years.”
—John Gray, Guardian

“An energetic and colourfully told polemic against privatisation.”
—Financial Times

“You don’t have to be ... excessively sentimental about the public service ethos to find the story Meek tells here genuinely shocking.”
—Jonathan Derbyshire, Prospect

“[A] devastating account of the privatisation dogma of the past 25 years... As demolition jobs go, this can hardly be bettered.”
—John Kampfner, Observer

“If you have a taste for historical irony & absurdity, you'll love this book.”
—Francis Wheen, Mail on Sunday