Narcoland: The Mexican Drug Lords and Their Godfathers (Paperback) 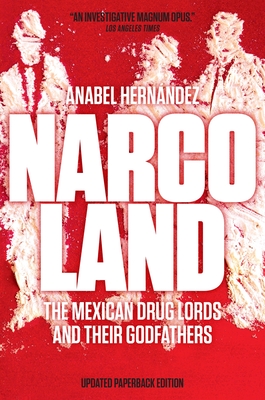 Narcoland: The Mexican Drug Lords and Their Godfathers (Paperback)


On Our Shelves Now
The definitive history of drug cartels, this “investigative magnum opus” takes readers to the frontlines of the ‘war on drugs’ in Latin America (Los Angeles Times)

The product of five years’ investigative reporting, the subject of intense national controversy, and the source of death threats that forced the National Human Rights Commission to assign two full-time bodyguards to its author, Anabel Hernández, Narcoland has been a publishing and political sensation in Mexico.

The “war on drugs” has so far cost more than 60,000 lives in just six years. Hernández explains in riveting detail how Mexico became a base for the mega-cartels of Latin America and one of the most violent places on the planet. At every turn, Hernández names—not just the narcos, but also the politicians, functionaries, judges, and entrepreneurs who have collaborated with them. In doing so, she reveals the mind-boggling depth of corruption in Mexico’s government and business elite.

Hernández became a journalist after her father was kidnapped and killed and the police refused to investigate without a bribe. She gained national prominence in 2001 with her exposure of excess and misconduct at the presidential palace, and previous books have focused on criminality at the summit of power, under presidents Vicente Fox and Felipe Calderón.

In awarding Hernández the 2012 Golden Pen of Freedom, the World Association of Newspapers and News Publishers noted, “Mexico has become one of the most dangerous countries in the world for journalists, with violence and impunity remaining major challenges in terms of press freedom. In making this award, we recognize the strong stance Ms. Hernández has taken, at great personal risk, against drug cartels.”
Anabel Hernández is one of Mexico’s leading investigative journalists, writing about slave labor, sexual exploitation, political corruption, organized crime and drug cartels. In 2012, she was presented with the Golden Pen of Freedom in Ukraine by the World Association of Newspapers and News Publishers, and in 2014 she received the Hans Verploeg Memorial Fund Award in Amsterdam for journalistic heroism.
“An investigative magnum opus.”
—Los Angeles Times

“This is a book that you read twenty-five pages at a time and then take a break from, shaking your head in disbelief that everything it contains could really have occurred. That it did only makes Hernández’s undertaking all the more necessary.”
—Barnes & Noble Review

“Rigorous, disturbing narrative of how drug cartels infiltrated Mexican society’s highest levels ... Essential reading for a serious understanding of how the war on drugs is destroying the social fabric of South American nations.”
—Kirkus Reviews

“The most remarkable feature of Anabel Hernández’s brave and invaluable account of Mexico’s blood-drenched drug wars is that she survived long enough to write it.”
—Sunday Times

“Braving the wrath of drug traffickers and government officials alike … Hernández has exposed the corruption at the heart of the drug war that has killed over 80,000 of her compatriots since 2006.” —Nation

“Anabel Hernández accuses the Mexican state of complicity with the cartels, and says the ‘war on drugs’ is a sham. She’s had headless animals left at her door and her family have been threatened by gunmen ... Narcoland became, and remains, a bestseller: more than 100,000 copies sold in Mexico. The success is impossible to overstate, a staggering figure for a nonfiction book in a country with indices of income and literacy incomparable to the American–European book-buying market.”
—Ed Vulliamy, Observer

“Anabel Hernández exposes the most murderous drug organization in Mexico, the Mexican government. Of course, this level of corruption is only possible thanks to the moral and financial support of the leaders in Washington. Here’s the story the media never has the time to tell you.” —Charles Bowden author of Murder City: Ciudad Juárez and the Global Economy’s New Killing Fields

“While many Mexican politicians and officials merely pretend to fight the drugs producers, Anabel Hernández has taken a genuine stand in favour of the rule of law and decency in her society. [Narcoland] is in itself an important statement. She deserves our respect and admiration for making it.”
—Spectator

“A searing indictment of a war on drugs Hernández believes was a sham from the start.”
—Financial Times