The Secret World of Oil (Paperback) 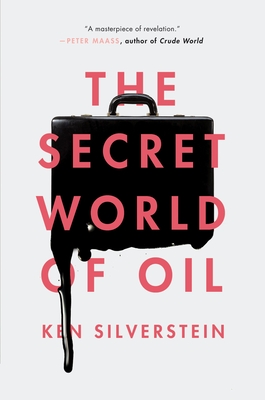 The Secret World of Oil (Paperback)


On Our Shelves Now
The oil industry provides the lifeblood of modern civilization, and bestselling books have been written about the industry and even individual companies in it, like ExxonMobil. But the modern oil industry is an amazingly shady meeting ground of fixers, gangsters, dictators, competing governments, and multinational corporations, and until now, no book has set out to tell the story of this largely hidden world.

The global fleet of some 11,000 tankers—that's tripled during the past decade—moves approximately 2 billion metric tons of oil annually. And every stage of the route, from discovery to consumption, is tainted by corruption and violence, even if little of that is visible to the public.

Based on trips to New York, Washington, Houston, London, Paris, Geneva, Phnom Penh, Dakar, Lagos, Baku, and Moscow, among other far-flung locals, The Secret World of Oil includes up-close portraits of a shadowy Baku-based trader; a high-flying London fixer; and an oil dictator's playboy son who has to choose one of his eleven luxury vehicles when he heads out to party in Los Angeles. Supported by funding from the prestigious Open Society, this is both an entertaining global travelogue and a major work of investigative reporting.
Ken Silverstein is a Senior Investigative Reporter with First Look Media. He has been a Fellow at the Edmond J. Safra Center for Ethics at Harvard University and at Open Society Foundations. He served as Washington Editor of Harper’s Magazine from 2006 to 2010. Previously on the staff of the Los Angeles Times, Silverstein has also written for Mother Jones, Wallpaper, Washington Monthly, the Nation, Slate, Salon, and many other publications.
“Ken Silverstein is one of the best investigative journalists of his generation – or any generation. The Secret World of Oil is a masterpiece of revelation. With a deft combination of detail and color, Silverstein exposes the darkest shade of crude: the fixers and middlemen who arrange the deals that provide us with the oil we need to keep our cars running and our homes warm. As Silverstein shows, these deals enrich the kleptocrats of our world and make life worse, rather than better, for their unfortunate subjects. It is a shameful and captivating tale about a pipeline of corruption that we must fix.” —Peter Maass, author of Crude World: The Violent Twilight of Oil

“Much has been written about the oil industry, but Ken Silverstein provides an entirely new window into this vitally important universe. For the first time, we encounter the fixers, flacks, and traders behind the secretive deals that drive the industry and enrich its leading operators. After reading this book, you will never think about oil in the same way again.” —Michael Klare, author of The Race for What’s Left: The Global Scramble for the World’s Last Resources

“Ken Silverstein’s sharp investigative reporting has again dragged a cast of shady operators into the public eye with his must-read book. Oil is the cause of so much pain in the world. As the fossil fuel industry tightens its grip on our warming planet, The Secret World of Oil names names, and exposes the brokers, lobbyists, and fixers who profit from the misery of millions and the accelerating pollution of the planet.” —Amy Goodman, host and executive producer, Democracy Now!

"Silverstein writes with keen reportorial objectivity but also understandable skepticism about ... the frighteningly tyrannical hold that oil has on the free (and not-so-free) world. The book’s revelations make Wall Street corruption seem tame by comparison."—Kirkus Reviews