Capitalism in the Web of Life: Ecology and the Accumulation of Capital (Paperback) 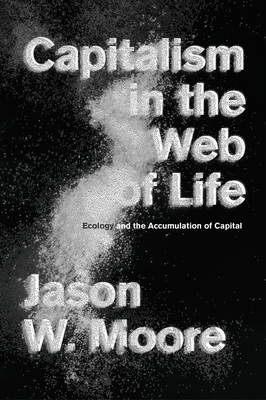 Capitalism in the Web of Life: Ecology and the Accumulation of Capital (Paperback)


On Our Shelves Now
Integrating both social and historical factors, this radical analysis of the development of capitalism reveals the ever-deepening relationship between capital and ecology

Finance. Climate. Food. Work. How are the crises of the twenty-first century connected? In Capitalism in the Web of Life, Jason W. Moore argues that the sources of today’s global turbulence have a common cause: capitalism as a way of organizing nature, including human nature. Drawing on environmentalist, feminist, and Marxist thought, Moore offers a groundbreaking new synthesis: capitalism as a “world-ecology” of wealth, power, and nature. Capitalism’s greatest strength—and the source of its problems—is its capacity to create Cheap Natures: labor, food, energy, and raw materials. That capacity is now in question.

Rethinking capitalism through the pulsing and renewing dialectic of humanity-in-nature, Moore takes readers on a journey from the rise of capitalism to the modern mosaic of crisis. Capitalism in the Web of Life shows how the critique of capitalism-in-nature—rather than capitalism and nature—is key to understanding our predicament, and to pursuing the politics of liberation in the century ahead.
Jason W. Moore is Assistant Professor, Department of Sociology, Binghamton University, and Coordinator of the World-Ecology Research Network. He writes frequently on the history of capitalism in Europe, Latin America, and the United States, from the long sixteenth century to the neoliberal era. His research has been recognized with many international awards.
“If nothing else, the climate crisis demonstrates that the history of capitalism is a thoroughly ‘environmental’ one. This energizing book proposes an inventive framework for making sense of that past, and for orienting ourselves as we get down to the business of changing the future.”
—Naomi Klein, author of This Changes Everything and The Shock Doctrine

“The achievement of Moore’s book is to move past a metaphysical concept of nature towards an historical one … Such a rich historical understanding of world-ecological regimes is going to be of vital importance.”
—McKenzie Wark, Public Seminar

“Capitalism in the Web of Life seeks to analyze the root cause of this impasse for environmentalism: the widely-shared view that ‘the environment’ is a separate and unique part of existence outside of capitalism that capitalism devalues.”
—New Inquiry

“Nature is not a foundation, container, or resource; it is us. As Moore tells us, we must live history as if nature matters.”
—Donna Haraway, University of California at Santa Cruz

“If you’re interested in cutting-edge ecological thinking, Capitalism in the Web of Life is a must-read. Moore’s scope is vast, and few could pull off as ambitious an analytical achievement as he has here. There’s enough scholarship, wit and insight to leave your copy with margin notes on every page, and ideas for a lifetime. A landmark book.”
—Raj Patel, author of Stuffed and Starved

“Moore’s radical and rigorous work is, and richly deserves to be, agenda-setting.”
—China Miéville

“A superb and much needed book, rigorous, groundbreaking, yet accessible.”
—Christian Parenti, author of Tropic of Chaos

“Probably the most significant work of eco-Marxism out there.”
—Benjamin Kunkel, author of Utopia or Bust

“The type of theory we should all be pursuing … If you don′t have a copy of this thing already, you should get one.”
—Samuel Fassbinder, Daily Kos

“A magisterial rethinking of world environmental history. It makes for a major work of synthesis and theory.”
—Michael Watts, University of California, Berkeley

“Jason Moore’s Capitalism in the Web of Life is, above all else, an ambitious book … Moore sets out to do nothing less than to articulate, under the name of world-ecology, a ‘new paradigm’ for critical scholarship on capitalism, world history, and environmental thought that will transcend, once and for all, the dualism that for him is the singular source of all of the violence of modernity.”
—Sara Nelson, Antipode: A Radical Journal of Geography

“Moore’s theoretical contribution, and it is major, is his insistence that value is determined by, and capitalism is dependent upon, what he calls the ‘Four Cheaps’ … His examples are wide-ranging and historical. Moore is at his best in this book when he not only ranges across centuries but also ranges across numerous fields of thought, most notably laboring to overcome the divide between Marxist value theory and ecology.”
—Juliana Spahr, Mediations: Journal of the Marxist Literary Group

“Not only does Moore provide an exceptionally powerful sense of the dystopian impact of capitalism … he also reveals a compelling dialectical grasp not just of how it might have to come to an end, but why it would be deplorable even if there were no limits to its continuing.”
—Kate Soper, Radical Philosophy

“For nearly two decades, environmental historian Jason Moore’s ‘world-ecology’ theorisation has crossed the boundaries of sociological, historical, environmental, economic and literary disciplines. His monograph, an amalgamation of decades of research and critical writing as well as cross-disciplinary engagement in the humanities and social sciences, is likely to become central to future environmental theorisation.”
—Michael Paye, Green Letters: Studies in Ecocriticism

“Moore calls for ‘a new ontological politics’ to subvert the metaphysical and moral imagination of capitalist nature … Affirms historical materialism as the basis for the solution to our ecological crisis.”
—Eugene McCarraher, Commonweal

“Jason Moore … has produced a text that is required reading. Moore … seeks to bring nature to the centre of historical change and a dialectical understanding of capitalism to the heart of the analysis.”
—Marx and Philosophy Review of Books

“Capitalism in the Web of Life is required reading for all those with an interest in the patterns of development of agriculture in capitalism, both historical and contemporary.”
—Henry Bernstein, Journal of Agrarian Change

“Few books published today have such a broad scope or are as forceful in their claims, and Capitalism in the Web of Life is certain to spark productive conversations in upper-level political ecology and critical development seminars, as well as among faculty working in a range of disciplines.”
—Eric H. Thomas, Journal of Political Ecology