Absolute Recoil: Towards A New Foundation Of Dialectical Materialism (Paperback) 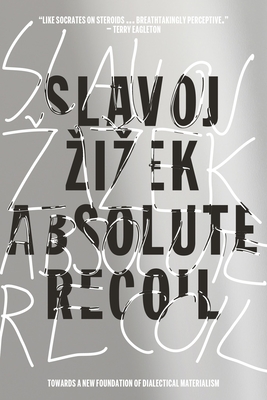 Absolute Recoil: Towards A New Foundation Of Dialectical Materialism (Paperback)


On Our Shelves Now
Philosophical materialism in all its forms – from scientific naturalism to Deleuzian New Materialism – has failed to meet the key theoretical and political challenges of the modern world. This is the burden of philosopher Slavoj Žižek’s argument in this pathbreaking and eclectic new work. Recent history has seen developments such as quantum physics and Freudian psychoanalysis, not to speak of the failure of twentieth-century communism, shake our understanding of existence.

In the process, the dominant tradition in Western philosophy lost its moorings. To bring materialism up to date, Žižek – himself a committed materialist and communist – proposes a radical revision of our intellectual heritage. He argues that dialectical materialism is the only true philosophical inheritor of what Hegel designated the “speculative” approach in thought.

Absolute Recoil is a startling reformulation of the basis and possibilities of contemporary philosophy. While focusing on how to overcome the transcendental approach without regressing to naïve, pre-Kantian realism, Žižek offers a series of excursions into today’s political, artistic, and ideological landscape, from Arnold Schoenberg’s music to the films of Ernst Lubitsch.
Slavoj Žižek is a Slovenian philosopher and cultural critic. He is a professor at the European Graduate School, International Director of the Birkbeck Institute for the Humanities, Birkbeck College, University of London, and a senior researcher at the Institute of Sociology, University of Ljubljana, Slovenia. His books include Less Than Nothing; The Year of Dreaming Dangerously; Living in the End Times; First as Tragedy, Then as Farce; In Defense of Lost Causes; six volumes of the Essential Žižek; and many more.
Praise for Slavoj Žižek:

“The excitable fluency, ursine congeniality and gleeful readiness to provoke and offend all feed the sense of authentic sponanaeity and energy that has made Žižek somethig like European philosophy’s punk icon, packing out auditoriums around the world.”
—Josh Cohen, New Statesman