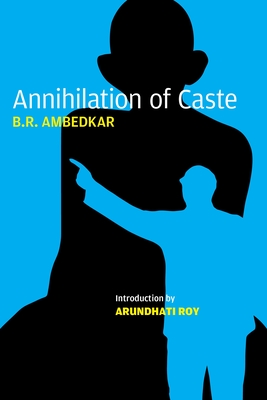 By B.R. Ambedkar, Arundhati Roy (Introduction by), S. Anand (Editor)
List Price: $26.95
Our Price: $23.95
(Save: $3.00 11%)
On Our Shelves Now
“What the Communist Manifesto is to the capitalist world, Annihilation of Caste is to India.” —Anand Teltumbde, author of The Persistence of Caste

B.R. Ambedkar’s Annihilation of Caste is one of the most important, yet neglected, works of political writing from India. Written in 1936, it is an audacious denunciation of Hinduism and its caste system. Ambedkar – a figure like W.E.B. Du Bois – offers a scholarly critique of Hindu scriptures, scriptures that sanction a rigidly hierarchical and iniquitous social system. The world’s best-known Hindu, Mahatma Gandhi, responded publicly to the provocation. The hatchet was never buried.

Arundhati Roy introduces this extensively annotated edition of Annihilation of Caste in “The Doctor and the Saint,” examining the persistence of caste in modern India, and how the conflict between Ambedkar and Gandhi continues to resonate. Roy takes us to the beginning of Gandhi’s political career in South Africa, where his views on race, caste and imperialism were shaped. She tracks Ambedkar’s emergence as a major political figure in the national movement, and shows how his scholarship and intelligence illuminated a political struggle beset by sectarianism and obscurantism. Roy breathes new life into Ambedkar’s anti-caste utopia, and says that without a Dalit revolution, India will continue to be hobbled by systemic inequality.
Bhimrao Ramji Ambedkar was born in 1891 into an “Untouchable” family of modest means. One of India’s most radical thinkers, he transformed the social and political landscape in the struggle against British colonialism. He was a prolific writer who oversaw the drafting of the Indian Constitution and served as India’s first Law Minister. In 1935, he publicly declared that though he was born a Hindu, he would not die as one. Ambedkar eventually embraced Buddhism, a few months before his death in 1956.

Arundhati Roy is the author of the Booker Prize–winning novel The God of Small Things. Her recent political writings include Listening to Grasshoppers, Broken Republic, and Capitalism: A Ghost Story.

S. Anand is the publisher of Navayana, an independent press in New Delhi. He is the coauthor of Ambedkar: The Fight for Justice, a graphic biography, and has annotated this edition of Annihilation of Caste.
“Annihilation of Caste has to be read ... No Hindu who prizes his faith above life itself can afford to underrate the importance of this indictment.” —M.K. Gandhi

“What Communist Manifesto is to the capitalist world, Annihilation of Caste is to caste India. Arundhati Roy’s introduction is expansive and excellent. S. Anand’s annotations have style and perfection.” —Anand Teltumbde, author of The Persistence of Caste: The Khairlanji Murders & India’s Hidden Apartheid

“For the 1930s, Annihilation of Caste was a case of marvellous writing with conceptual clarity and political understanding – something the world should know about. The annotations illumine the whole book. Roy’s essay has the sharp political thrust one has come to expect from her.” —Uma Chakravarti, author of Everyday Lives, Everyday Histories: Beyond the Kings and Brahmanas of ‘Ancient’ India and Pandita Ramabai: A Life and a Time

“Arundhati Roy’s ‘The Doctor and the Saint’ manages to convey an intimate and deeply felt sensitivity to the history that produced Annihilation of Caste. The annotations do an excellent job of providing supplementary information, corroboration and relevant citations ... A robust edition of an under-appreciated classic.” —Satish Deshpande, Professor of Sociology, Delhi University

“S. Anand’s annotations are very thorough and on the whole based on first-rate and current scholarship on South Asia and elsewhere ... Arundhati Roy’s essay is punchy, eye-opening and provocative ... There is very little left of the saintly stature of the Mahatma once Roy is done with him, while Ambedkar, quite rightly, is left standing as the man in full control of his senses and his very considerable intellect.” —Thomas Blom Hansen, Director, Stanford’s Center for South Asia

“This annotated edition of Annihilation of Caste was long overdue ... The copious footnotes give the reader a sense of direction and all the additional information needed for making sense of the text – including the translation of the Sanskrit shlokas Ambedkar used to document his analysis. This edition is truly a remarkable achievement.” —Christophe Jaffrelot, author of Dr Ambedkar and Untouchability: Analysing and Fighting Caste

“Those who have read Annihilation of Caste many times before will still read this work for the sake of the annotations and reference-based clarifications of Ambedkar’s thoughts. This edition will foster a more critical engagement among readers.” —Ayyathurai Gajendran, anthropologist