Anything But Mexican: Chicanos in Contemporary Los Angeles (Paperback) 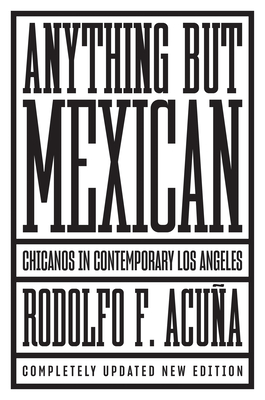 Anything But Mexican: Chicanos in Contemporary Los Angeles (Paperback)


On Our Shelves Now
Mexicans and other Latinos comprise fifty percent of the population of Los Angeles and are the largest ethnic group in California. In this completely revised and updated edition of a classic political and social history, one of the foremost scholars of the Latino experience situates the US's largest immigrant community in a time of anti-immigrant fervor. Originally published in 1996, this edition analyses the rise and rule of LA's first-ever Mexican American mayor, Antonio Villaraigosa, as well as the harsh pressures facing Chicanos in an increasingly unequal and gentrifying city.
Rodolfo F. Acuña is the founding chair of the Chicana/o Studies department at California State University at Northridge—the largest Chicana/o Studies Department in the United States. He has authored twenty-two books, including three children’s books, and Voices of the US Latino Experience; Corridors of Migration: Odyssey of Mexican Laborers, 1600–1933; and Occupied America: A History of Chicanos.

“Anything But Mexican challenges neoliberal interpretations of the history of Los Angeles which blame Mexicans and other immigrants of color for the decline of the city. Acuña’s provocative work confronts these historical myths, signalling that Latinos will not be dismissed.”
—Deena González, Pomona College

“Required reading on Chicanos in the Southwest. This book will stand amongst the classics in Chicano Studies.”
—Teresa Cordova, University of New Mexico

"This book defines important political and social space for Latinos in what has become the capital of Mexicans in the US. Anything But Mexican is a sensitive and often pointed discourse."
– Carlos Velez-Ibanez, UC Riverside

"Rodolfo Acuña is one of the foremost  scholar/activists in the country, bridging the gap between the Chicano  movement and a multi-racial left that is often uninformed about the  growing strategic importance of Latinos in the US."
– Eric Mann, Director, Labor Community Strategy Center, Los Angeles

"A political and social history every  bit as insightful and powerful as the earlier works by a pioneering  Chicano scholar dubbed by some the 'W.E.B. Dubois of Chicano Studies.'"
– James Cockcroft, SUNY Empire