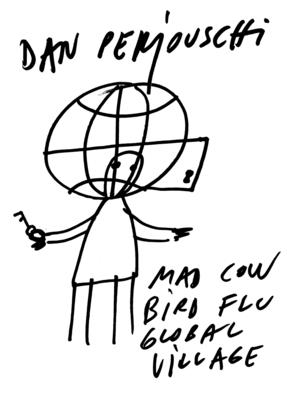 
On Our Shelves Now
Spontaneous,abrupt and wickedly humorous, Dan Perjovschi is fast becoming one ofthe world&rsquo;s most influential cartoonists. He presents here a skepticalcommentary on contemporary global conflicts and dilemmas, military andeconomic imperialism, and the complexities and contradictions of socialand political life in a post-cold war world. Drawing on popular formsof newspaper cartoons and comics for his often unpalatable truths, hisdrawings are disorderly and disrespectful, puncturing the world of themass media and their trivial, bizarre products. Perjovschi is a masterof the punchline, his command of language unique, infused with puns andmultiple meanings. The result is at once hilarious and subversive.
Dan Perjovschi is an installation artist, curator, and graphic designer. He has exhibited at many venues internationally, including the Venice Biennale, MoMA, New York, and Tate Modern, London; and has held many fellowships, including at Duke University, NC, and Atlantic Center for the Arts, Florida. His previous books include I Draw I Happy and Naked Drawings. He lives in Bucharest, Romania.
&ldquo;A hybrid of graffiti and activism, a &lsquo;Kilroy was here&rsquo; for the MoveOn set ... a testament to the power of unabashed agitprop.&rdquo;—New York Times