END_OF_DOCUMENT_TOKEN_TO_BE_REPLACED

The World According to Tomdispatch: America in the New Age of Empire (Paperback) 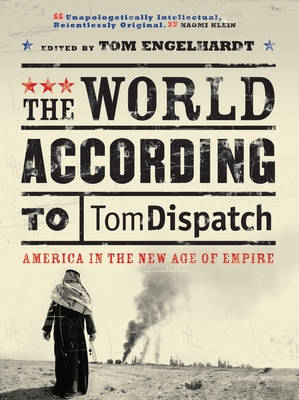 Tomdispatch.com has established itself as the go-to blog for contemporary US politics, and the favored website for leading commentators; its powerful, no-holds-barred essays resonate throughout the global online media. This comprehensive volume offers readers a chance to catch up on some of the finest political analysis of our age, from Afghanistan and Iraq through Guantánamo and extraordinary rendition, Hurricane Katrina, global warming, black gold, and the misbegotten ‘clash of civilizations.’ Introduced and edited by Tomdispatch’s creator Tom Engelhardt, The World According to Tomdispatch is the essential primer for anyone seeking guidance along the highways and byways of our post-9/11 world.

Tom Engelhardt created and runs the website Tomdispatch.com, a project of The Nation Institute, where he is a Fellow. He is the author of a highly praised history of American triumphalism in the Cold War, The End of Victory Culture. Each spring he is a Teaching Fellow at the Graduate School of Journalism at the University of California, Berkeley. He lives in New York City.

Noam Chomsky is Institute Professor in the Department of Linguistics and Philosophy at the Massachusetts Institute of Technology. He is the author of American Power and the New Mandarins, Manufacturing Consent (with Ed Herman), Deterring Democracy, Year 501, World Orders Old and New, Powers and Prospects, Profit over People, The New Military Humanism and Rogue States.

Mark Danner is the author of The Massacre of El Mozote: A Parable of the Cold War.

Mike Davis is the author of several books including Planet of Slums, City of Quartz, Ecology of Fear, Late Victorian Holocausts, and Magical Urbanism. He was recently awarded a MacArthur Fellowship. He lives in Papa’aloa, Hawaii.

Greg Grandin is the author of Empire’s Workshop, The Last Colonial Massacre, Who is Rigoberta Menchú?, the award-winning The Blood of Guatemala, and the 2009 National Book Awards finalist Fordlandia. A professor of history at New York University and a Guggenheim fellow, Grandin has served on the United Nations Truth Commission investigating the Guatemalan Civil War and has written for the Los Angeles Times, Nation, New Statesman, and New York Times.

Chalmers Johnson was President of the Japan Policy Research Institute and Professor Emeritus at the University of California, San Diego. He was the author of numerous books, including Blowback: The Costs and Consequences of American Empire and Japan: Who Governs?

Bill McKibben is the author of Eaarth: Making a Life on a Tough New Planet, among other titles; he is the founder of 350.org, which in 2010 organized what CNN called “the most widespread day of political action in the planet’s history.”

Jonathan Schell teaches at Wesleyan University and the New School University. A Fellow at the Nation Institute and co-founder of a recently formed citizen’s initiative to negotiate the abolition of nuclear weapons, he is the author of nine books including Fate of the Earth, which was published in twenty countries.

Rebecca Solnit is author of, among other books, Wanderlust, A Book of Migrations, A Field Guide to Getting Lost, the NBCC award-winning River of Shadows and A Paradise Built In Hell. A contributing editor to Harper’s, she writes regularly for the London Review of Books and the Los Angeles Times. She lives in San Francisco.

Nick Turse is an award-winning journalist, historian, essayist, and the associate editor of the Nation Institute’s Tomdispatch.com. He is the author of The Complex: How the Military Invades Our Everyday and has written for the Los Angeles Times, San Francisco Chronicle, The Nation, Le Monde Diplomatique, In These Times and the Village Voice.

“Tomdispatch is one of the wonders of the electronic age. A touch of the finger and you get the juciest, meatiest information and analysis, so rich a feast of intelligence and insight I often felt short of breath. Now Tom Engelhardt has assembled some of the best of his dispatches, from some of the boldest and most astute commentators in the country. So take a deep breath and read.”—Howard Zinn

“Unapologetically intellectual, relentlessly original, for many of us these essays are the key pieces of analysis that made sense of our post-9/11 world. How odd that many of them have never actually been printed. Until now.”—Naomi Klein

“At a time when the fourth estate so often seems to be in its death throes, it’s our great good fortune to have Tomdispatch, where vital and independent commentary abounds and the provocative ideas of genuine public intellectuals are given full reign.”—Susan Faludi

“Tomdispatch is indispensable and irreplaceable, a bright light illuminating a dark time in American history. The publication of this splendid collection of dispatches is cause for celebration.”—Andrew J. Bacevich

“Tomdispatch is essential reading. It is a one-stop shop where you can find the most provocative thinkers writing the most eloquent and hard hitting articles about the most pressing issues of the day. Read, get mad, and take action.”—Amy Goodman and David Gooodman