A Child in Palestine: The Cartoons of Naji al-Ali (Paperback) 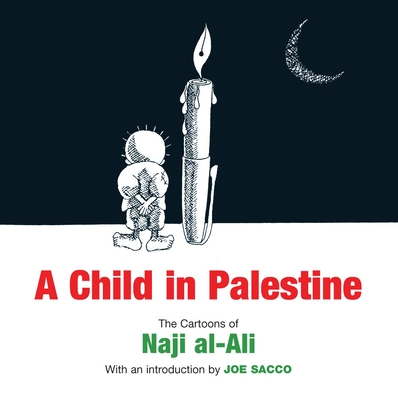 A Child in Palestine: The Cartoons of Naji al-Ali (Paperback)


On Our Shelves Now
Naji al-Ali grew up in the Palestinian refugee camp of Ain al-Hilweh in the south Lebanese city of Sidon, where his gift for drawing was discovered by the Palestinian poet Ghassan Kanafani in the late 1950s. Early the following decade he left for Kuwait, embarking on a thirty-year career that would see his cartoons published daily in newspapers from Cairo to Beirut, London to Paris.

Resolutely independent and unaligned to any political party, Naji al-Ali strove to speak to and for the ordinary Arab people; the pointed satire of his stark, symbolic cartoons brought him widespread renown. Through his most celebrated creation, the witness-child Handala, al-Ali criticized the brutality of Israeli occupation, the venality and corruption of the regimes in the region, and the suffering of the Palestinian people, earning him many powerful enemies and the soubriquet “the Palestinian Malcolm X.”

For the first time in book form, A Child in Palestine presents the work of one of the Arab world’s greatest cartoonists, revered throughout the region for his outspokenness, honesty and humanity.

“That was when the character Handala was born. The young, barefoot Handala was a symbol of my childhood. He was the age I was when I had left Palestine and, in a sense, I am still that age today and I feel that I can recall and sense every bush, every stone, every house and every tree I passed when I was a child in Palestine. The character of Handala was a sort of icon that protected my soul from falling whenever I felt sluggish or I was ignoring my duty. That child was like a splash of fresh water on my forehead, bringing me to attention and keeping me from error and loss. He was the arrow of the compass, pointing steadily towards Palestine. Not just Palestine in geographical terms, but Palestine in its humanitarian sense—the symbol of a just cause, whether it is located in Egypt, Vietnam or South Africa.”—Naji al-Ali, in conversation with Radwa Ashour
Naji Salim al-Ali (1938–87) was a Palestinian cartoonist, noted for the political criticism in his work. He drew over 40,000 cartoons, which often reflected Palestinian and Arab public opinion and were sharply critical commentaries on Palestinian and Arab politics and political leaders. He is perhaps best known as creator of the character Handala, pictured in his cartoons as a young witness of the satirized policy or event depicted, and who has since become an icon of Palestinian defiance. Naji al-Ali was shot by unknown assailants outside the offices of “al-Qabas”, a Kuwaiti newspaper in London on July 22, 1987 and died 5 weeks later.

Joe Sacco lives in Portland, Oregon. He is the author of many acclaimed graphic novels, including Palestine, Safe Area Gorazde, But I Like It, Notes from a Defeatist, The Fixer, War’s End, and Footnotes in Gaza.
“This is a ground-breaking book. For the first time, Western readers are beckoned into Palestinian lives by the graphic warmth, inspiration and horror of the cartoonist Naji al-Ali, whose iconic Hanthala is our witness and conscience, imploring, rightly, that we never forget.”—John Pilger