END_OF_DOCUMENT_TOKEN_TO_BE_REPLACED

The Case for Withdrawal from Afghanistan (Paperback) 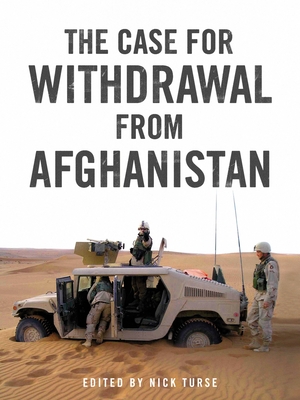 Known as the graveyard of empires, Afghanistan has now been singled out as Obama’s “just war,” the destination for an additional thirty thousand US troops in an effort to shore up an increasingly desperate occupation. Nick Turse brings together a range of leading commentators, politicians, and military strategists to analyze America’s real motives and likely prospects. Through on-the-spot reporting, clear-headed analysis and historical comparisons with Afghanistan’s previous occupiers—Britain and the Soviet Union, who also argued that they were fighting a just and winnable war—The Case for Withdrawal From Afghanistan carefully examines the current US strategy and offers sobering conclusions. This timely and focused collection aims at the heart of Obama’s foreign policy and shows why it is so unlikely to succeed.

Nick Turse is an award-winning journalist, historian, essayist, and the associate editor of the Nation Institute’s Tomdispatch.com. He is the author of The Complex: How the Military Invades Our Everyday and has written for the Los Angeles Times, San Francisco Chronicle, The Nation, Le Monde Diplomatique, In These Times and the Village Voice.

Andrew J. Bacevich is a professor of international relations and history at Boston University.

Tom Engelhardt created and runs the website Tomdispatch.com, a project of The Nation Institute, where he is a Fellow. He is the author of a highly praised history of American triumphalism in the Cold War, The End of Victory Culture. Each spring he is a Teaching Fellow at the Graduate School of Journalism at the University of California, Berkeley. He lives in New York City.

Chalmers Johnson was President of the Japan Policy Research Institute and Professor Emeritus at the University of California, San Diego. He was the author of numerous books, including Blowback: The Costs and Consequences of American Empire and Japan: Who Governs?

“A pathbreaking synthesis of American and Russian perspectives on the illusions of empire and the impossibility of ‘victory’ in Afghanistan. As the contributors so eloquently emphasize, the only realistic and humane option can be spelled in three letters: O-U-T.”—Mike Davis, author of Planet of Slums

“A fascinating and essential guide which puts the war in Afghanistan in the context of its recent history and dispels propaganda stereotypes about how the US, Britain and their allies became involved.”—Patrick Cockburn, author of The Occupation: War and Resistance in Iraq