Why Did the Heavens Not Darken?: The Final Solution in History (Verso World History Series) (Paperback) 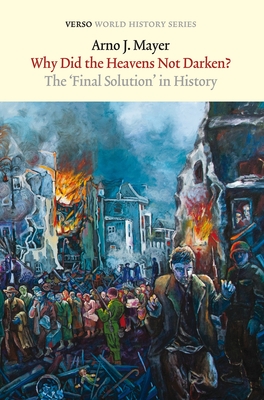 Why Did the Heavens Not Darken?: The Final Solution in History (Verso World History Series) (Paperback)


On Our Shelves Now
Was the extermination of the Jews part of the Nazi plan from the very start? Arno Mayer offers astartling and compelling answer to this question, which is much debated among historians today.In doing so, he provides one of the most thorough and convincing explanations of how the genocidecame about in Why Did the Heavens Not Darken?, which provoked widespread interest and controversywhen first published.

Mayer demonstrates that, while the Nazis’ anti-Semitism was always virulent, it did not becomegenocidal until well into the Second World War, when the failure of their massive, all-or-nothingcampaign against Russia triggered the Final Solution. He details the steps leading up to thisenormity, showing how the institutional and ideological frameworks that made it possible evolved,and how both related to the debacle in the Eastern theater. In this way, the Judeocide is placedwithin the larger context of European history, showing how similar ‘holy causes’ in the past havetriggered analogous – if far less cataclysmic – infamies.
Arno Mayer is Professor Emeritus of European History at Princeton University. His many books include The Persistence of the Old Regime: Europe to the Great War, The Furies: Violence and Terror in the French and Russian Revolutions, Plowshares into Swords: From Zionism to Israel and Why Did the Heavens Not Darken? The “Final Solution” in History.
“As fresh, challenging and thought-provoking in its conceptualization as it is thoroughly researched and brilliantly, stylishly and above all sensitively written ... a masterly study.”—The Nation

“A fascinating account of one of the most important chapters in human history.”—Los Angeles Times Book Review