How the Hula Girl Sings (Paperback) 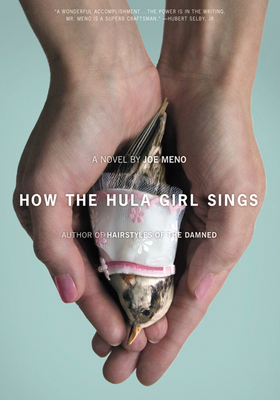 How the Hula Girl Sings (Paperback)


On Our Shelves Now
"A wonderful accomplishment. . . . The power is in the writing. Mr. Meno is a superb craftsman."--Hubert Selby Jr. "The author moves the story along at a surprisingly fast and easy pace. The evil eyes of small-town America seem to peer from every page of Meno's claustrophobic noir, where the good and the bad are forced down the same violent paths."--Kirkus Reviews "Joe Meno writes with the energy, honesty, and emotional impact of the best punk rock."--Jim DeRogatis, pop music critic, Chicago Sun-Times "A likable winner that should bolster Meno's reputation." --Publishers Weekly "Joe Meno writes with the energy, honesty, and emotional impact of the best punk rock." --Jim DeRogatis, Chicago Sun-Times "Fans of hard-boiled pulp fiction will particularly enjoy this novel." --Booklist A young ex-con in a small Illinois town. A lonely giant with a haunted past. A beautiful girl with a troubled heart. Strange and darkly magical, How the Hula Girl Sings begins exactly where most pulp fiction usually ends, with the vivid episode of the terrible crime itself. Three years later, Luce Lemay, out on parole for the awful tragedy, does his best to finds hope: in a new job at the local Gas-N-Go; in his companion and fellow ex-con, Junior Breen, who spells out puzzling messages to the unquiet ghosts of his past; and finally, in the arms of the lovely but reckless Charlene. How the Hula Girl Sings is a suspenseful exploration of a country bright with the far-off stars of forgiveness and dark with the still-looming shadow of the death penalty.

Joe Meno is the best-selling author of the novels Hairstyles of the Damned, The Boy Detective Fails, How the Hula Girl Sings, and Tender As Hellfire. He was the winner of the 2003 Nelson Algren Award for short fiction and is a professor of creative writing at Columbia College Chicago.