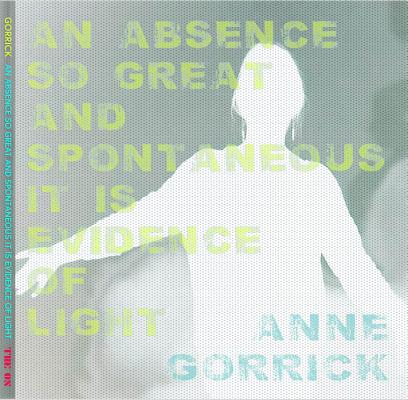 "In a story of William Carlos Williams as a child, told by his mother, the poet puts the wrong shoes on the wrong feet by accident and upon realizing it, leaves them on for a while thinking about how weird it feels. Anne Gorrick does something like that, but with the internet and gender fluidity, in this brilliantly bizarre new book of poems. Searching for anything other than correct answers, pursuing online flaneurie by translation of source texts, the explosive humor here of interruptions, half-remembered allusions, and shifts in diction invents a gonzo musical logic, a texture which stops off at Jackson Mac Low, at Leslie Scalapino's splintered phenomenology, and at a NY school idiom of being surprised by your own writing, before continuing on with its own glorious road movie. "Kiss the snot otter in a hard hat / and then tell a story about your stuff" "Is Percocet on the periodic table?" "Herpes travels to a science center as Brineshrimpdirect" "Plenty of fish, please touch, pleaser shoes" "She is pro-life curious"" - Trace Peterson

"'An Absence' is the news told in "Starfish Slang" and delivered to the house of poetry. You think this book of poems should land on the front lawn, but instead it crashes through the living room window and shatters predictability. It startles you, but no one gets hurt, you are only more aware of the world around you. And healed by the inventory. Anne Gorrick confounds and clarifies through a determined weaving, that is both familiar and strange. The poetry seems to be an accident, but you know it is full of care, and you can't help but rubberneck as the scenes that are revealed line by line become increasingly absurd and revelatory. It is a time capsule and core sample, compiled from fragments of beauty and danger. There is no turning back." -Michael Rothenberg

"These poems began in 2011 with an investigation into John Cage's adventures with chance. I was working at the State University of New York at New Paltz, and we had a small museum, the Samuel Dorsky Museum of Art, with a regular exhibition called Reading Objects. The idea of the show is to explore and expand on what is traditionally said on those little cards next to paintings. So we were presented with an array of visual work, and could pick pieces to write about. I decided to write something to accompany a musical score by Cage that was to be part of exhibition. I wrote something, and I came to hate it. This poem was displayed next to Cage's score. I felt I didn't nearly go far enough with the poem to really engage with Cage. So I started again by researching Cage, and I also spent time with Jackson Mac Low's 'Representative Works.'

"Around this time, I began to really notice and found myself entertained by the way search engines attempt to anticipate our needs. I began to slowly type lines of poetry (eventually working my way toward entire short poems) into the Google and Bing search boxes, and laugh my way through the list of wrongly anticipated results that appeared underneath my search. I began to make poems out of these (wrong) search results. At first, I thought I was adding chance into the poem, but I came to realize it was just the opposite: these search results came from the zeitgeist's algorithmic desire, not my own, which ended up expanding the possibilities for the poem. The poetic "I" dissolves in this desire." - Anne Gorrick