The Jungle: [A Graphic Novel] (Paperback) 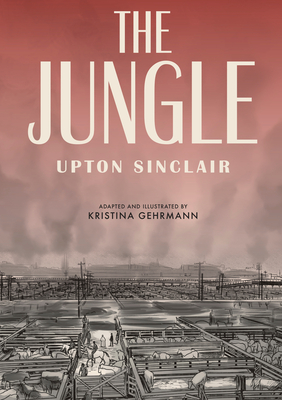 The Jungle: [A Graphic Novel] (Paperback)


On Our Shelves Now
A compelling graphic novel adaptation of Upton Sinclair's seminal protest novel that brings to life the harsh conditions and exploited existences of immigrants in Chicago's meatpacking industry in the early twentieth century.

Long acclaimed around the world, Upton Sinclair's 1906 muckraking novel The Jungle remains a powerful book even today. Not many works of literature can boast that their publication brought about actual social and labor change, but that's just what The Jungle did, as it led to the passage of the Pure Food and Drug Act of 1906. In today's society, where labor and safety of the food we eat remain key concerns for all, Sinclair's shocking story still resonates. Bringing new life and energy to this classic work, adapter and illustrator Kristina Gehrmann takes Sinclair's prose and transforms it through pen and ink, allowing you to discover (or rediscover) this book and see it from a whole new perspective.
Upton Sinclair was an American journalist and novelist, a Pulitzer Prize winner for fiction, and author of the classic muckraking novel The Jungle that led to the passage of the Pure Food and Drug Act in 1906.

Kristina Gehrmann is an illustrator and graphic novelist living and working in Hamburg and Meersbusch, Germany. She explores historical and fantasy subjects in a detailed and painterly style inspired by classical Western artwork from the seventeenth to nineteenth centuries.
“When people ask me what has happened in my long lifetime I do not refer them to the newspaper files and to the authorities, but to [Sinclair’s] novels.” —George Bernard Shaw

"Even now, more than a century after its publication, The Jungle remains a gut punch. In this masterful adaptation, Kristina Gehrmann takes an unflinching look at the rot festering at the core of our contemporary world, reminding us that Sinclair's parable is as topical and relevant as it's ever been.”—Aubrey Sitterson, writer, The Comic Book Story of Professional Wrestling and No One Left to Fight

"The original novel by Upton Sinclair remains a powerful rebuke of those in power who would prey upon the weak. Kristina Gehrmann’s graphic novel adaptation provides an essential gateway to the revered classic and is a remarkable work in its own right. . . . This is a highly accessible work that retains the power of the original novel while inviting a contemporary eye.”—Comics Grinder