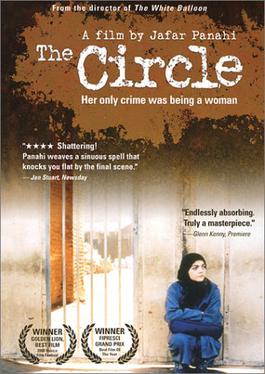 This film showing is a benefit for Revolution Books as part of a fund drive to raise $5,000 by mid-February.

The Circle weaves together the tales and struggle of multiple women over the course of a single day and night in Tehran. The Circle shines a light on the oppression of women at the core of the Islamic Republic, which has now burst open with the mass rebellion under the banner of "Woman Life Freedom."

Stay for a discussion on the film, the current uprising, the responsibility of people here at this moment, and the potential of a real revolution in Iran.

"Profoundly dangerous to the status quo in Iran because it asks us to identify with the plight of women who have done nothing wrong except to be female." Roger Ebert. Chicago Sun Times, 2001

“A memorable and devastating indictment of the oppression facing many women in Iran” Desson Thomas, Washington Post, 2001

Director Jahar Panahi has been arrested multiple times and in 2010 was convicted of "assembly and colluding with the intention to commit crimes against the country’s national security and propaganda against the Islamic Republic." He was sentenced to 6 years in prison and banned for 20 years from making or directing any movies. But he continued to direct while under house arrest. In July '22, he was arrested again and is now in prison.
Revolution Books supports the courageous uprising in Iran sparked by the murder of Mahsa Amini for wearing an “improper hijab.” For over 3 months, thousands of people throughout Iran have taken to the streets defying the government's increasing repression.

For more about what is happening in Iran to to: www.revcom.us. Read The Revolutionary Path Forward and the Great Significance of the Communist Party of Iran (MLM)