A Surge of Book Banning: An Ominous Move toward a Fascist America. Needed: Resistance – and Revolution! 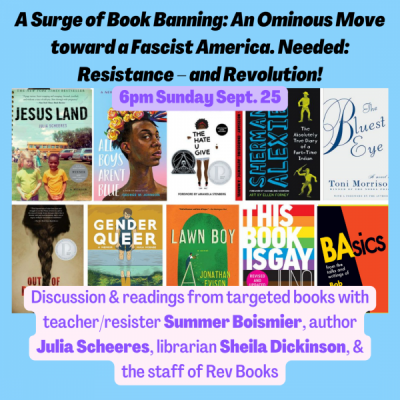 We will read from some of the targeted books and discuss the epidemic of book banning, the ominous signal it sends about where some powerful forces want to take this country, why it has exploded across America especially, but not only, in schools, and what we need to do to stop it.

In 2022, 1,651 different titles, have been challenged or banned, the highest number ever. The New York Times says: “Book banning efforts have grown rapidly in number and become much more organized, divisive and vitriolic over the past two years.

Look at the books they are banning! Books that question and depart from the model of the traditional family and gender roles, that bring voices of the oppressed to the fore, that dare to expose the history of oppression and its ongoing intensification in this country. New state laws, “gag orders” restrict what teachers can teach and say in class, including which books they can use and surveillance of classrooms, and the threat of firing, and worse, if teachers do not comply.

And look in the schools at the kind of education that they want to bring forward in place of what they are banning – where LGBTQ people are shoved back into the closet, where women have no right to make fundamental decisions about their bodies, where race in America cannot be discussed in a way which might make the Proud Boys uncomfortable, and where fundamentalist Christianity is increasingly promoted inside the public school system. Libraries and librarians have been threatened, school board meetings disrupted, officials and others given death threats. All this is not “grass roots populist activism”, but is organized and led nationally, including through the Republican Party and a network of think tanks and other organizations. All this is an expression of the deep divisions that run through this country from top to bottom.

This event will bring together a politically diverse group of people whose books and work have been directly affected by this. Our store will join the discussion with its view that the divisions shown here are deepening, that they are signs of the extreme times we are entering, and that standing up against all of this is very important in its own right and very important as part of the fight for a radically emancipating revolution.